The number of Pakistanis being sentenced or killed for blaspheming against the accepted strain of Sunni Islam is on the rise. 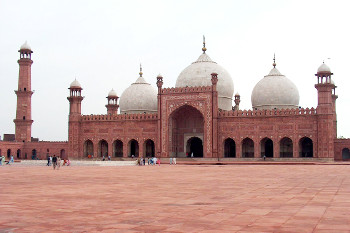 British citizens have been accused of blasphemy in Pakistan in the past year, both narrowly escaping with their lives.

Masud Ahmed, an Ahmadi Muslim doctor, was arrested last November for ‘pretending to be a Muslim’, after a man posing as a patient recorded him reading the Quran.

Pakistan’s Constitution ‘officially’ excommunicated Ahmadi Muslims in 1974, with the Pakistan Penal Code barring the community from ‘using Islamic titles’, ‘posing as Muslims’, or ‘outraging the religious sentiments of Muslims’. In Pakistan you can be jailed for reading the Quran if you happen to belong to the Ahmaddiya sect.

Hundreds of people queued up outside the police station where Ahmed was held, vying to punish ‘the blasphemer’ with their own hands. Luckily, Ahmed got bail on the third attempt and is now living safely in Glasgow with his children and grandchildren.

Mohammad Asghar, meanwhile, is still in Pakistan, after being arrested on blasphemy charges for proclaiming prophethood in January. Asghar was diagnosed with paranoid schizophrenia in 2010 and is mentally unstable.

Whilst in jail he was shot at by a prison guard; the guard had been incited to act by former police officer Mumtaz Qadri, who was in the same prison for murdering Salmaan Taseer in 2011.

Taseer, a renowned businessman and the governor of Punjab, Pakistan’s most powerful province, was gunned down by Qadri, his security guard, for calling for reforms in the blasphemy law. Taseer had also publicly supported Asia Bibi, a Christian woman convicted of blasphemy for allegedly making derogatory remarks about Prophet Muhammad in 2010.

Asia Bibi was sentenced to death by Lahore High Court last month, with all appeals to pardon her having been rejected.

While human rights activists were busy raising global awareness for Asia Bibi’s cause following last month’s verdict, a Christian couple was burnt alive for allegedly burning pages of the Quran. The woman was five months pregnant.

A similar allegation was launched against Rimsha Masih, a 14-year-old Christian girl, who managed to flee to Canada last year.

On Thursday, a Pakistani police officer killed a man with an axe for allegedly blaspheming against the companions of Prophet Muhammad.

Meanwhile, two ostensibly secular Pakistani political parties, PPP and MQM, have been at loggerheads recently over blasphemy accusations, with PPP leader Khurshid Shah accused of blasphemy for labelling the word mohajir (immigrant) derogatory. Mohajir is the word that is used to describe Prophet Muhammad and his companions who migrated from Mecca to Medina.

Ironically, these two seemingly secular political parties have perfectly demonstrated how Pakistan’s blasphemy law is misused to settle personal scores. From Asia Bibi to the murdered Christian couple, blasphemy is being used as a garb with which  to conceal petty animosities, at the cost of human life.

Some critics of Pakistan’s blasphemy law have suggested that it is a remnant of the British colonial past. Upon independence, Pakistan adopted the Indian Penal Code that was written for British India by Lord Macaulay in 1860.

Article 295 of the Indian (and Pakistani) Penal Code protects all worship places, with Article 295-A added to quell any ‘deliberate and malicious’ attempts to outrage religious sentiments.

The amendment was made by the British Raj as an attempt to curtail communal riots after Mahashay Rajpal, a Hindu publisher, was killed in 1927 for publishing a book deemed to be offensive to the Prophet Muhammad.

In the 1980s, former Pakistani president and Islamist dictator Ziaul Haq added clauses 295-B and 295-C to the Pakistan Penal Code. These were Islam-specific and sanctioned the death penalty for blasphemy.

Not only have the Islamic clauses made the blasphemy law irrevocable, they have further tightened the noose around Pakistani minorities by increasing incidence of blasphemy accusations.

Pakistani Christians, Hindus, and Ahmadis have long been persecuted by these draconian laws.  The Shia, who represent one fifth of the country’s population, have also come under fire recently. For the Shia there are echoes of the climate that in 1974 led Zulfiqar Ali Bhutto, the founder of PPP and Pakistan’s first democratically elected leader, to declare Ahmadis heretics.

While the Ahmadis were apostatised for not following the mainstream interpretation of the ‘finality of prophethood’, the Shia are accused of heresy for not recognising the first three caliphs of Islam, who the Sunnis revere.

Pakistani blasphemy law is becoming a relentless guillotine for minorities, with hardliners calling for all Pakistani Muslims to adhere to an identical and extremist brand of Islam, as flaunted by the likes of IS, al-Qaeda and of course Saudi Arabia.

The law is not only a threat to British Pakistanis belonging to minority Islamic sects, but for any rationalist. Pakistan is one of 13 countries, all of which are Muslim majority, where apostasy or atheism is punishable by death.

Although nobody has as yet been officially executed for blasphemy in Pakistan, many have been butchered publicly by people taking the law into their own hands.

In the past two months alone, two Sunni Muslims – a defence lawyer in a blasphemy case, and a university dean propagating a liberal brand of Islam – have been murdered in broad daylight, clearly highlighting the threat that Pakistan’s blasphemy law poses to humanity.