If the objective is to reduce debt from one year to the next, neither a surplus – nor even a balanced budget – is strictly necessary 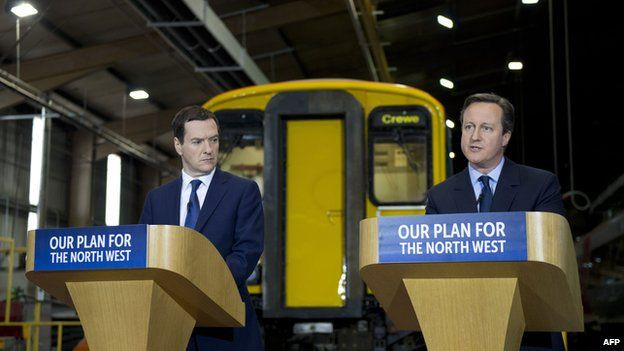 The chancellor is proposing a new fiscal rule for the UK government. In his annual speech from Mansion House, George Osborne announced plans for legislation which would ‘in normal times’ ensure the government always runs a ‘budget surplus to bear down on debt’.

There are two ways to consider the economic merits of this. First, to what extent are the chancellor’s overall fiscal objectives justified? Second, is this rule required to meet those objectives?

With regard to the first, there is a growing view that the scale and speed of fiscal consolidation proposed by the Conservative Party lacks serious justification.

It has been argued (for example here and here) that when real interest rates are close to zero (such as in the UK, and making conventional monetary expansion impossible), fiscal expansion is the most efficient way to boost growth and reduce debt.

At IPPR we have also pointed to the reciprocal and adverse effects of a rapidly shrinking government balance sheet on other key components of GDP, such as household borrowing, and making another private debt bubble more likely.

More recently, economists at the International Monetary Fund (IMF) have argued that the UK’s ‘fiscal space’ is such that the cost-benefit analysis (in terms of distortive effects on the economy) of either holding current levels of debt constant, or else actively reducing them, strongly favours the former.

Notwithstanding the above, and assuming that the broad direction of the Conservative Party’s plans (and, for that matter, those broadly speaking of the Labour Party and Liberal Democrats) is correct, the economic justification for the chancellor’s announcement remains unclear.

The true extent to which this proposal represents a substantive change from existing rules will depend upon what is meant by ‘budget’ and ‘normal’. The existing objective of the government’s fiscal mandate is the cyclically adjusted current budget, which must be set on a course to balance within a rolling three-year time horizon.

The simplest interpretation of Osborne’s words would in effect imply a shift from a three-year mandate to a one-year; and from a target to bring the budget into balance, to an aim of bringing it into surplus – but with no significant change in the types of spending to which the rules apply.

Yet it is difficult to justify these new rules solely in terms of the chancellor’s stated objectives of bringing down debt in a meaningful way. For example, targeting a single year rather than three is vulnerable to statistical gaming, by bringing forward or delaying the start or finish of a government programme.

But perhaps more importantly, if the objective is to reduce debt from one year to the next, neither a surplus – nor even a balanced budget – is strictly required.

The graph below shows the historical year-on-year change in total government debt (as a percentage of GDP), plotted alongside the size of total government borrowing for the corresponding year.

A blue bar below the horizontal axis indicates debt falling, while a red bar above this axis indicates that the government budget was in deficit that year. Since the mid-1950s, year on year debt has fallen on 36 occasions.

This has been achieved despite the budget being in surplus for only eight years in total. For 28 of those 36 years, falling debt to GDP was achieved despite running a deficit on the overall budget.

Annual deficit versus year on change in public debt 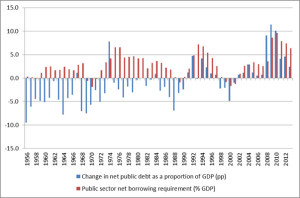 Measuring debt as a proportion of GDP is not only a good way of assessing change across time, but it is also the standard way with which to gauge its threat (or otherwise) to the broader economy.

If the content of this week’s announcement is not strictly necessary ‘to bear down on debt’ in a way that is any more meaningful than that which is necessary, perhaps we need to be looking elsewhere to discern the motives for the chancellor’s most recent intervention.