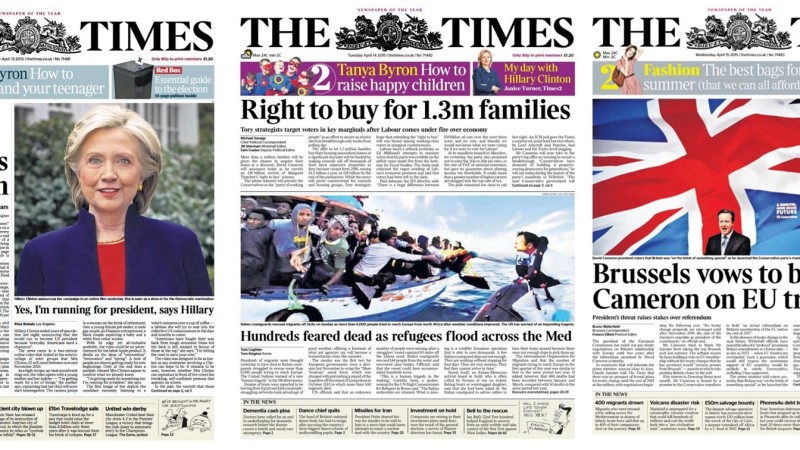 Take a look at these pictures. They show the front page for the Times newspaper for Monday, Tuesday and today. Notice anything strange?

If you’re still stumped, recall that this was the week the two – that’s two – main parties released their election manifestos to the country.

Yet the Times newspaper, thought to be less partisan than other papers, could find no space on its front pages for the Labour manifesto – not even as a smaller story or tiny short at the bottom of the page.

Today’s paper leads with ‘Brussels vows to block Cameron on EU treaty’, about the prime minister’s valiant but futile stand against the European juggernaut.

While Labour does get a mention in the ‘right to buy’ story on Tuesday, it’s only to highlight criticism from the Institute for Fiscal Studies and shoot holes in Labour’s campaign. (There’s also a cartoon at the foot of the page of a toothy Ed Miliband saying: “Will I make life tough enough? Hell yes!”)

So, what gives? No headlines? No stories? It’s not as if Labour’s manifesto release lacked new policies, from freezing rail prices to expanding childcare services, or surprise moves like placing deficit reduction and fiscal responsibility pledges at the front of the document.

It’s as if these covers were printed in an alternate Tory universe where only one party is running, or at least with any chance of success. And this in what was once the newspaper of record.

You would expect this sort of thing from the openly conservative newspapers. (The Daily Mail for example also ignored Labour on its covers.) But the Times is still considered to be a more serious and objective newspaper, both here and around the world, despite being swallowed by Rupert Murdoch’s News UK in 1981.

How can anyone honestly look at these front pages and call them an authoritative or honest account of this week’s news?

24 Responses to “Missing something? No room for Labour manifesto on the Times front page”