UKIP are not opposed to the deal's content, they only wish they'd thought of it themselves 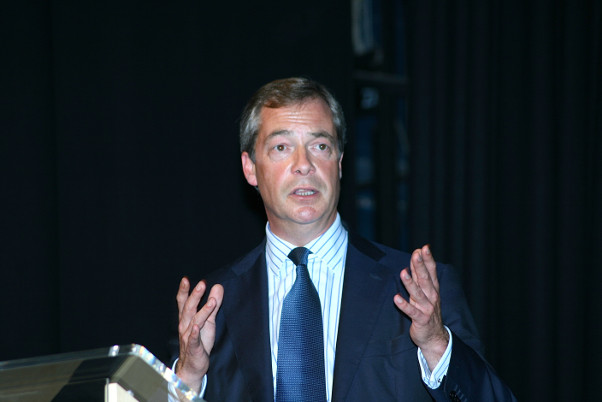 In their manifesto (p.17), UKIP call it ‘astonishing’ that other parties can remain committed to EU membership whilst opposing the Transatlantic Trade and Investment Partnership (TTIP).

“The level of public concern around TTIP makes it a good example of what can potentially go wrong while we remain in the EU and allow EU Commissioners to negotiate every single trade agreement on behalf of twenty-eight member states, including the UK, en bloc.

“Fears of what TTIP might contain precisely illustrate why UKIP believes we should leave the EU and negotiate our own free trade agreements again.

“We find it astonishing that other political parties, while launching high-profile campaigns against TTIP, nevertheless remain committed to our EU membership. Their hypocrisy is shameless.”

UKIP’s pledge to secure the exclusion of the NHS by name from TTIP is couched in anti-EU sentiment. But they are missing the point. The problem most parties have with TTIP is not where it’s negotiated; it’s the content of the deal.

For example, TTIP will bring EU food and environment safety standards closer to those of the US. US regulations are far less strict. In the EU, a substance has to be proven safe before it can be used; in the US a substance can be used until proven unsafe.

The difference this makes is alarming; the EU currently bans 1,200 substances from use in cosmetics, the US just 12.

Another matter for concern is the way TTIP could affect employment. In a briefing from last year (p.9), the European parliament admitted that:

“Simulations by Capaldo (2014)44 find that TTIP would lead to net losses in terms of GDP, personal incomes and employment in the EU (income decrease between Euro 165 and Euro 5 000, approximately 600 000 job losses, a continuing downward trend of the labour share).”

The US also has lower labour standards and employment rights than EU countries, which is why workers are opposed to the deal across the EU – not just in the UK. This is not a deal that will benefit workers or public services anywhere in the EU, which is why using it as an example of what the EU is dragging us into doesn’t work.

It makes sense for trade negotiations with big trading blocs like the US to be handled by the EU, rather than by each country individually. And it is not as though the UK has joined unwillingly.

Another big problem people have with TTIP is that it is undemocratic. The investor-state dispute settlement (ISDS) is a treaty which would allow corporations to sue governments before an arbitration panel made up of corporate lawyers, at which other people have no representation, and which is not subject to judicial review. This could lead to situations like that which has allowed tobacco giant Philip Morris to sue Uruguay for its anti-smoking campaign.

Last year, 14 states wrote to the EU Commissioner trying to secure the inclusion of ISDS in the deal. As George Monbiot pointed out in the Guardian, this was a campaign led by David Cameron, and one that is vociferously opposed by campaigners in most member states. So while the deal has come out of the collusion of EU leaders, its impact on Britain simply cannot be blamed on the fact of the European Union existing.

UKIP are actually in favour of many of the things TTIP stands for; they just don’t like it being negotiated by the EU. Last year Nigel Farage said as much in a statement to the IBT:

“UKIP is in favour of free trade, but we are opposed to the undemocratic Commission negotiating on our behalf. Of course we look at each trade deal on case by case basis.”

“If we’d been a free and independent country, I rather suspect we’d have had such a deal with the US ten years ago, if not twenty [….]  I think we have no alternative but to support the deal, even if we’d rather have done it ourselves. And of course in principle free trade is an excellent thing, a consummation devoutly to be wished.”

UKIP would welcome the relaxation of environmental restrictions that they complain are forced on the UK by the EU. They are in favour of reduced rights for workers – they want to scrap race discrimination laws, think paid maternity leave is ‘lunacy’ and want to scrap holiday and sick pay. Their manifesto (p.40) says:

“Some EU directives, such as the Working Time Directive, need amending because they actively restrict the British work ethos and therefore our economy.“

And where the NHS is concerned, UKIP are not to be trusted. They may claim they want to protect it now, but Farage has changed his mind many times on privatising the health service; his ominous assertions that a ‘debate’ is needed suggest that when the going gets tough, UKIP won’t stand up for the NHS.

This is why UKIP’s manifesto pledge on TTIP is nothing to do with public concern, and instead demonstrates pure egotism. They do want the undemocratic TTIP deal; they just wish they had thought of it themselves.