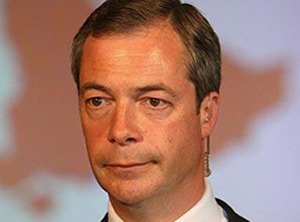 UKIP leader Nigel Farage has again suggested that he would support privatising the the NHS. In an interview with BBC political editor Nick Robinson, Farage admitted that his party were not behind him on the issue but that he had not changed his opinion:

“I triggered a debate within UKIP that was outright rejected by my colleagues, so I have to accept that. As time goes on, this is a debate that we’re all going to have to return to.”

Farage was responding to Robinson’s questions about a film uncovered last November by the Guardian, in which he told UKIP supporters that the he believed the NHS would be better funded by an insurance based system. He said:

“There is no question that healthcare provision is going to have to be very much greater in 10 years than it is today, with an ageing population, and we’re going to have to find ways to do it.”

“Nigel Farage has confirmed that a vote for UKIP is a vote for the privatisation of the NHS and for a full American healthcare system.

“Farage admits he says one thing in public about the NHS but another behind closed doors. He has shown UKIP’s statements on protecting the NHS to be hollow.

“UKIP claim to stand up for working people, but in reality they are more Tory than the Tories. Farage will never be able to distance himself from his real views. He should be honest with the public.”

72 Responses to “Farage admits he still wants a private NHS”