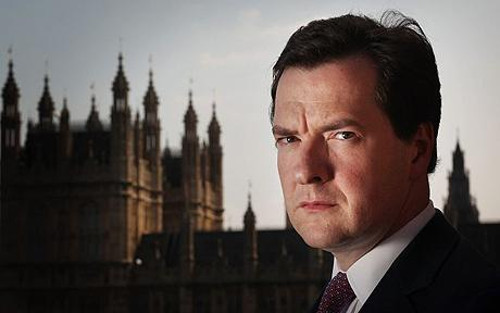 “This is a Budget that takes Britain one more big step on the road from austerity to prosperity” – George Osborne’s Budget Speech.

The coalition’s austerity policies failed to reduce the deficit as planned. The fiscal and statistical contortions in the Budget cannot escape the reality that austerity is set to intensify in the next parliament.

For people who have endured seven years of falling real earnings, prosperity is as far off as it has ever been.

Austerity has not led to prosperity; it has led only to more austerity. There is no prosperity on this road.

While the OBR might once more see earnings restored with productivity over the next parliament, the experience of the last is that intensified austerity will continue to suppress greatly productivity and real earnings. In the context of a weakened global environment and increasing deflationary pressures, the threat of recession remains very real.

On the basis of the OBR’s projections for government final demand (i.e. government consumption and investment), the next parliament will involve three consecutive years when nominal spending is cut. 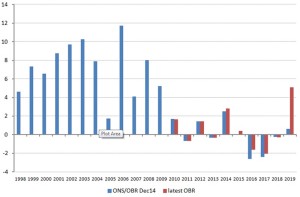 These cuts may have been reduced a little relative to the position at the Autumn Statement, but they remain unprecedented, certainly in post-war history and certainly – and crucially – relative to cuts in the current parliament. Moreover the latest projections are likely to be flattered by low inflation – viewed from the perspective of real growth in what the OBR call ‘resource DEL spending’, the cuts are even more severe – see Nicola Smith’s post. On top of this are severe cuts in welfare spending, that remained unexplained but are inevitably hitting the poorest the hardest.

One of the essential features of this forecast is that many apparent improvements are driven by the much lower-than-expected inflation outcomes, in particular reduced debt interest payments on index-linked gilts and lower uprating of benefit and tax thresholds.

But low inflation is in part a symptom of the repressed activity and earnings that have been caused by the government’s austerity policies. If deflationary forces take hold, and there is a renewed round of lower pay increases (and NB today’s labour market statistics showed reduced earnings growth) and hence lower taxes, then these gains may be short lived.

In the last parliament, in spite of spending cuts, deficit reduction fell very far short of expectations when the plans were set. The government may boast about reducing the deficit by half, but it was expected to be nearly gone by now. For 2014-15 (i.e. ‘now’) OBR expect the deficit to be £90bn, nearly three times as high as the original ‘plans’ for £37bn. 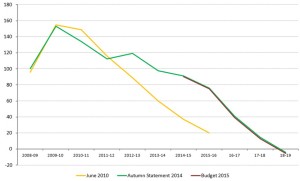 The chart indicates that the claimed gains to the public finances in the Budget are imperceptible in reality. The celebrated change to public debt, so that the target is reached a year sooner (2015-16 rather than 2016-17) follows mainly because the Chancellor is planning to sell (£20bn of) financial assets that were rescued in the financial crisis.

The irony is beyond belief: financial sector assets are apparently going to restore the public finances that they wrecked in the first place. But here again we should put the position into perspective. In June 2010 the government expected debt to peak at 70 per cent of GDP in 2013-14 or £1,316 billion in 2015-16; the latest projections have the peak at 80 per cent in 2015-16 or £1,626bn in 2019-20. I.e. in cash terms government debt is now expected to be £300bn higher than originally thought.

In the TUC Budget statement and accompanying paper The price of austerity, we explained how austerity policies failed. Cutting spending has reduced demand, growth, labour income and taxes by much more than expected when austerity was imposed from 2010. Spending rather than cutting can succeed in restoring the public finances where austerity has failed.

In the meantime, this is a budget of trickery not reality. Failure is dressed up as success. We are asked to celebrate as benign deeply dangerous policies into the future. Most people know they have got poorer, and fear the austerity to come. They are right, and the Budget changes nothing.

4 Responses to “The Budget changes nothing: the road from austerity has led only to more austerity”