London lost 1,847 uniformed officers last year, yet Boris thought it appropriate to make an impulse buy whose use Teresa May won't approve 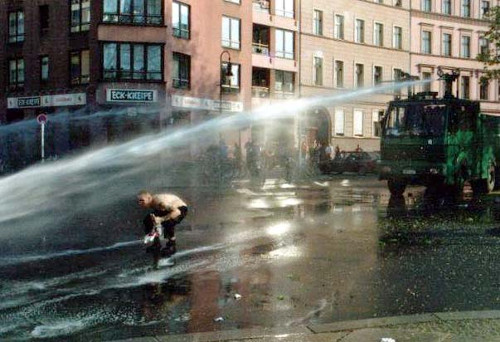 Splashing out £218,000 on three second-hand German water cannon last year, without the approval of the Home Secretary, was a little premature of Boris Johnson to say the least. Teresa May’s refusal to approve their use before the General Election however, demonstrates this was an ill-judged proposal.

In his usual bullish manner, Boris chose Mayor’s Question Time last March to casually notify Assembly members of his decision to go ahead with the purchase of these deeply controversial appliances. Not only did the mayor pay no heed to the fact the majority of London Assembly members had voted against their use, including a number of his Conservative colleagues, he also failed to offer any credible explanation to substantiate his decision. Worryingly, the mayor conceded that he had not even read the report from the Assembly’s Police and Crime Committee, which challenged the use of water cannon in detail.

Questions were raised over his rushed timing, with the mayor setting out to purchase the water cannon before the summer, despite the Association of Chief Police Officers openly stating that they had ‘no specific intelligence’ that disorder was anticipated nor any particular understanding of in what circumstances the cannon could be used.

The mayor deemed the purchase an ‘interim solution’ ahead of the government’s decision on their long-term use across Britain. Many people will understandably question the justification of spending £218,000 each on three ‘interim solutions’ that the German authorities were purportedly selling due to safety concerns. In short, they look more like Boris Johnson impulse buys with very little idea why he needed them or what he’d do with them.

Had the mayor had the evidence to vindicate his decision, it would have been a little easier to forgive his folly; but we’ve yet to see any such clear evidence to support their use.

Scrabbling to find convincing examples of when they could justifiably be used, the Met cited civil unrest on the scale seen at the carnival against capitalism in 1999; the disorder in Tottenham in August 2011; and violence between fans connected to a Millwall versus Birmingham football match. However, the Met’s own report into the 2011 summer riots, the biggest unrest in recent years, concluded that water cannon were ‘unlikely to have been an appropriate and practical option owing to the speed and agility of the disorder’.

In preparation for the national debate on water cannon, ACPO identified three incidents in the last 10 years – all in London – in which the water cannon may have been considered as a tactic. These were the Countryside Alliance march in 2004; the Gaza demonstrations outside the Israeli Embassy in 2008; and student protests at the Millbank building in 2010. Interestingly, Boris Johnson put on record that he would not have wanted water cannon to be utilised in these incidents and went so far as saying he believed such use would have been ‘counter-productive’ during the student protests.

The question remains, as to why he would persist with this costly and controversial proposal, when he too questions the legitimacy of the arguments in favour of their use.

The experiences of other countries have shown water cannon to be both extremely dangerous and bluntly indiscriminate – a combination which should have no place in our capital city. Only last month, New York’s Police Commissioner Bill Bratton warned that water cannon had a ‘horrific history’ and would not be ‘contemplated being used anywhere in America’. Why then is the mayor so keen on seeing them in London?

Of course, police officers often make the case for new equipment or legal powers and many advocate tools they believe to be useful in dealing with those who mean us harm. Conversely, there is a duty on politicians to ensure such tools are truly necessary for the protection of the public. This requires a full public debate – something we did not have before Boris committed taxpayer money to purchasing these weapons.

When viewed in context, the mayor’s proposal takes on an additional absurdity. The Met is already facing massive budget cuts. Between May 2010 and December 2014, we lost 1,847 uniformed officers from our boroughs, and nearly half of Londoners say they do not feel the police have a visible presence in their local neighbourhood. Water cannon are no substitute for police visibility, and as such are unlikely to bolster public confidence in our capital’s policing.

The time has come for the mayor to make a dignified concession that his overtly-extravagant purchase was an ill-advised mistake. If he refuses, the public will undoubtedly conclude that he is more interested in continuing his militant posturing than doing what is best for the capital. Meanwhile, the onus is on the home secretary to hold firm and rule out the use of water cannon not only until the next election, but for good.

2 Responses to “Amid massive budget cuts, Boris has spent £218,000 on water cannon he cannot use”