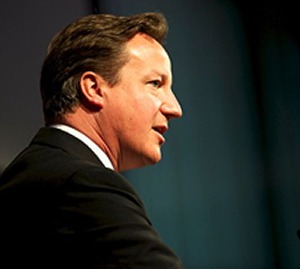 If David Cameron continues his attacks on trade unions, then begging British businesses to award their workers a pay rise is about as useful as pointing to the sky and shouting ‘please don’t rain’ while simultaneously demolishing flood defences.

The causes of wage stagnation are well-documented. Relatively low levels of productivity mean that output per worker makes it harder for firms to afford pay increases. Globalisation and technological change (essentially, decent jobs being lost to robots or workers in the developing world) are also frequently cited as reasons for insipid pay growth over the long-term.

Equally critical, however, is the decline of workers’ bargaining power, related to the decrease in membership of trade unions.

In the UK, figures from the Department for Business Innovation and Skills show private sector trade unions earn 7 per cent more than their non-unionised counterparts, while in the public sector union members earn nearly 20 per cent more. Research from the European Trade Union Institute suggests that organised workers, often led by trade unions who can negotiate pay increases together, are much more effective at standing up to bosses who tell them they can’t afford to give their staff a pay rise (often while awarding themselves a six or seven figure bonus for cutting costs).

Countries with a higher proportion of workers covered by a ‘collective bargaining agreement’ also suffer much lower levels of inequality. And the same countries endured less severe declines in the ‘wage share’ (the proportion of the country’s GDP going to workers’ wages) during the financial crisis.

In America, where pay stagnation for ordinary workers has exercised pay for politicians and commentators as much as in Britain, it has not gone unnoticed that for the minority of private sector workers fortunate enough to be in a trade union, pay is rocketing. This prompted hedge fund multi-millionaire and Tory donor Crispin Odey and investment magazine Moneyweek to suggest that now is the time to join a Trade Union. 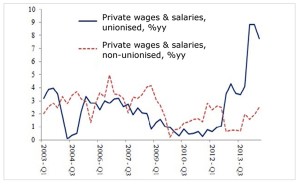 If even these pillars of the financial establishment are espousing the virtues of trade union membership then surely the prime minister can do so? After all, unions are in many ways a perfect ‘free market’ solution to pay stagnation, in that they empower workers to deliver pay increases themselves, rather than solving the problem through government intervention.

Some sensible members of the Conservative Party understand this and advocate for better relationships with the union movement.

And yet the Conservative manifesto will propose extensive curbs to the right to strike, significantly reducing a powerful bargaining tool that workers can deploy in the face of exploitative employers. Many Tory MPs are engaged in further plans to undermine trade unions and demonise them in a way that will make it harder to recruit new members. This is the exact opposite of what’s required.

Luke Hildyard is a contributing editor to Left Foot Forward