While the eyes of the world are so sharply focused on the need to defend press freedom, it is vital to acknowledge the increasing trend for journalists to be targeted. 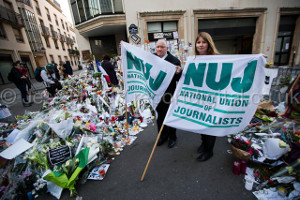 While the eyes of the world are so sharply focused on the need to defend press freedom, it is vital to acknowledge the increasing trend for journalists to be targeted

Visiting the site close to the Charlie Hebdo offices along with assistant general secretary Seamus Dooley, it was impossible not to be instantly moved by the mounting tributes to the magazine’s journalists.

To the cartoons, flowers, candles, wall of post-it notes with written messages from visitors all around the world and Voltaire’s collected works, we added an NUJ flag, and our special NUJ placard.

It bore the slogan ‘Je Suis Charlie’ and a picture of a pencil, which had become a symbol of the free press.

In the interviews with camera crews and journalists, early in the morning when we added our tributes, I took the opportunity to explain that the NUJ’s presence, along with our own Paris branch members, was to honour and remember all of those journalists murdered simply for doing their jobs, as well as Charb (Stéphane Charbonnier), Cabu (Jean Cabut), Wolinski (Georges Wolinski), Tignous (Bernard Verlhac), Bernard Maris and the rest of their colleagues at Charlie Hebdo.

While the eyes of the world are so sharply focused on the need to defend press freedom and ideals of tolerance and democracy, it is vital to acknowledge the increasing trend for journalists to be targeted, intimidated, attacked and killed as an attempt to silence not just them, but all other journalists in their wake.

Last year 118 journalists were killed, with the death toll breaching 1,000 lives lost in the past decade. These murders are all too often accompanied by impunity by governments who facilitate and sustain a political environment where journalists are threatened and targeted without justice.

We gathered for the demonstration, taking our place at the head of the march, immediately behind the families of the murdered journalists and their magazine colleagues, a group bravely out in force despite their visibly raw and overwhelming grief.

From our position we had a bird’s eye view of the appearance – for it was just that – of world leaders. Back at the hotel that night, it was bemusing to see how much attention their attendance got in some of the coverage, with descriptions of how they had ‘marched alongside’ ordinary Parisians and ‘led the demonstration’. All of which is total rubbish.

It was the families of murdered journalists and  their remaining Charlie Hebdo colleagues who led the march, followed by our contingent of trade union leaders, all wearing our white satin armbands printed with one word – Charlie. A few coachloads of heads of state were brought further back along Boulevard Voltaire, five minutes before the start so they didn’t have to endure the cold.

They posed for photographs for journalists who had been brought in by another coach, linked arms awkwardly, then managed a stroll of a couple of hundred metres down the boulevard, shielded from the real marchers by security platoons and then hurriedly put back onto buses again and whisked away.

Cameron – who tweeted that morning that he was off to march alongside French people – clearly needs to get out on more demos to see how they really work. Only Hollande came over to greet the families.

Whoever can have decided it was a good idea to bring together a veritable rogue’s gallery on such a day, including known oppressors of press freedom and human rights offenders? On a day when French citizens were mobilised in their millions in their defence?

The prime minister of Turkey, the King of Jordan, the Tunisian prime minister, representatives from Hungary, Russia and Egypt, the Algerian ambassador, Saudi Arabia’s ambassador to France – Saudi Arabia’s parlous record on press freedom was amply demonstrated last week by the flogging of a blogger imprisoned for ‘insulting Islam’.

Derision was the appropriate response – one sign read: ‘It’s tough being honoured by the enemies of the press’.

The significance of the heads of state is a manufactured one, perpetuated in some coverage but certainly not all. At the end of the day what is more important – the awkward shuffling appearance of 44 world leaders or 4 million people taking to the streets in an act of unprecedented unity?

And unity is needed more than ever. In the early hours of the previous day, Rupert Murdoch, no less, had taken to Twitter to claim that all Muslims ‘must be held responsible’ for the murderous actions of a few extremists.

That is why it was such an amazing experience to be present on a demonstration that brought people together in a collective show of defiance and act of solidarity. The diversity of attendance in every sense was captivating.

There were wonderful little vignettes as we progressed down the boulevard, sartorial ones amongst them. There was the man who appeared out of one window dressed only in his loosely-tied dressing gown, regally waving at the crowds below; the elderly lady clad in her Sunday best, hat included; a burly guy standing proudly in the middle of his balcony on a chilly January Sunday holding a placard aloft, wearing nothing but his pants and a rather lived-in singlet.

Bobble-hatted children climbed trees and clapped along from precariously waving branches. Many people simply stood crying, holding their placards and paying their silent tributes to the families of those killed, and to the remaining staff of Charlie Hebdo.

Children wore signs declaring: ‘When I grow up I will be a journalist. I won’t be afraid’.

It was a positive, reflective and dignified fightback; even the salutary sight of snipers on rooftops did nothing to detract from the atmosphere of solidarity.

As well as attacking press freedom, last week’s attacks were designed to create instability, to stoke fear and make sections of society turn against each other.

That is why millions of people turned out to stand up for values including press freedom, solidarity, trade union freedom, freedom to follow the faith of your choice, an assertion of peace and a rejection of violence from citizens who refuse to allow attacks to splinter them, an affirmation that we will choose unity not division.

On our return back to the hotel that night, we reversed our route on the march, amazed to see that hours after we had set off thousands were still streaming down Boulevard Voltaire towards Place de la Nation.

As we arrived back at Place de la République a new addition to the monument to Marianne leapt out at us – stretched up in the palm of one statue’s outstretched hand was a giant pencil bearing, of course, the message ‘Je Suis Charlie’.

One Response to “National Union of Journalists join tributes in Paris”