And pay inequality is worse this year than last. 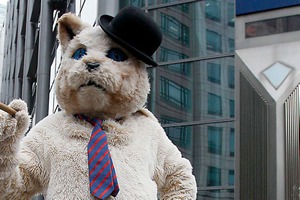 And pay inequality is worse this year than last

Today is ‘Fatcat Tuesday’, the day on which the amount of money made by Britain’s top executives will surpass the average UK worker’s earnings for the entire year.

The most recent figures for pay released by the chief executives of the biggest 100 companies on the London Stock Exchange put the average pay for these lucky few at just over £4.7 million.

Lobbyists for the City and big business (the CEOs themselves rarely explain why they deserve or need such enormous sums of money) protest that they have difficult jobs and work long hours (unlike teachers or nurses, presumably).

But even if we make the generous assumption that executives work 12 hour days, take less than 10 days annual leave a year and work three out of every four weekends, this still equates to hourly pay of around £1,200 per hour. Enough to surpass the £27,200 earned by the average UK worker last year by early evening today (Tuesday) assuming they returned to work on Monday 5 Jan.

For all the concern about inequality espoused by politicians of all parties, this is actually *worse* than last year, when the High Pay Centre carried out the same exercise based on the same methodology and found that chief executives would have to toil away for three days to earn the average UK annual salary, rather than just two.

While there are different ways of measuring top pay, the approximate size of the pay gap between those at the top and everybody else is clear and it doesn’t look like shrinking.

Last week, TUI Travel announced that CEO Peter Long was paid over £13 million in 2014. Just before Christmas, George Weston, the boss of Primark owners Associated British Food, was awarded a £5 million incentive payment for hitting performance targets, on top of a salary of £1 million and annual bonus of £900,000. Primark continues to refuse to pay the living wage to ordinary workers.

Even if we make a further generous assumption that the full amount of tax is paid on these riches, it’s still enough money to afford several top of the range cars, the upkeep of multiple properties and a series of foreign holidays each and every year before it’s even half spent.

The fact that such obscene incomes co-exist in the same economy as a million people who need food-banks to stave off hunger, or nearly 7 million who live in poverty despite having a family member in work, is perverse.

This matters because the lavish awards for chief executives help set the benchmark for other top earners. Pay for all FTSE 100 directors increased by 21 per cent last year. 2,600 senior bankers based in London were paid an average of £1.3 million each, while research from the High Pay Centre suggests that nearly 1,400 senior partners at nine leading law and accountancy firms are paid at least £1 million a year.

As a result, the share of total UK incomes going to the richest 1 per cent has more than doubled, from around 6 per cent in the late 1970s to 13 per cent today. The economy, at both a global and UK level, is structured in their interest.

For this tiny, self-designated class of top talent – often lucky enough to have their pay levels decided by their peers – the ‘competitiveness’ agenda means potential employers competing to see who can offer them the most money. For disempowered workers it usually means competing to reduce costs by holding down wages and eliminating workplace rights.

This is a situation that urgently needs addressing if capitalism is to maintain the public support it needs to survive. When chief executives have to work a week, or maybe even an entire month, to earn the annual pay of their average worker, we’ll know we’re on the right track.

8 Responses to “Fatcat Tuesday: Executive pay has already overtaken your earnings for the entire year”