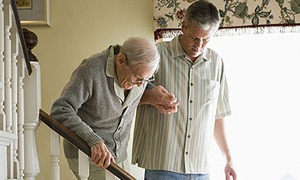 Up to 220,000 care workers are being illegally paid

The people who look after the most vulnerable in our society are being illegally underpaid and it is an absolute disgrace.

Between 160-220,000 care workers are routinely being paid below the National Minimum Wage. UNISON are now asking people to sign this petition calling upon the government to help end the practice.

We have been campaigning extensively on this issue for the last year. We have shown how it is bad news for care workers and bad news for the people they care for.

We have also drawn attention to the fact that the government has been failing to do enough to ensure the law of the land is being obeyed in one of the most important parts of our society.

HMRC investigated the care sector for not paying the National Minimum Wage between 2011 and 2013 and found that 50 per cent of the care providers they investigated were guilty.

Despite identifying such a high level of illegally low payments, and along with a damning report by the National Audit Office identifying that up to 220,000 care workers are being illegally paid, Vince Cable has failed to instruct HMRC to again proactively investigate the sector.

The Public Accounts Committee, chaired by Margaret Hodge, looked at the issue in the summer and said “We are astonished that up to 220,000 care workers earn less than minimum wage and seemingly little has been done to rectify this”.

Not one care company has been named and shamed yet by the government for non-payment of the National Minimum Wage.

Even though HMRC is aware of the situation, the onus is on care workers to report illegal payment.

Sadly HMRC is currently just relying on care workers to call their Pay and Rights Helpline to report their employer for paying them less than the National Minimum Wage.

This is the only way that an investigation will be triggered, but putting the emphasis on individual care workers to report their employers is unfair.

Many care workers have never been made aware of the existence of the helpline, and hundreds of thousands of them are employed on zero hours contracts and are afraid of losing their jobs if they speak out; UNISON has heard many examples of care workers who have had their working hours severely reduced after raising concerns that they were being illegally paid.

And over a three year period an average of only 17 homecare workers called the helpline each year.

Vince Cable must act now. Given the scale of the problem and the devastating impact it has on the quality of care, the government must order a prolonged and well resourced investigation into National Minimum Wage compliance in the care sector.

Andrew Smith MP has been leading these calls within parliament and recently secured a debate on the issue where the care minister Norman Lamb stated that he has requested that HMRC begin a new series of investigations into the care sector.

Despite this call, the Department of Business Innovation and Skills has failed to instruct HMRC to proactively investigate the care sector for National Minimum Wage compliance.

Therefore UNISON and the TUC have launched this petition addressed to Vince Cable, asking him to instruct that this crucially important work is begun.

We hope that you can sign and share it for the good of our care workers and the elderly and disabled people they care for.

Sign the petition to end the illegal under-payment of care workers.