Scottish devolution and questions about free speech have prompted a resurgence of one of our oldest ethical debates. 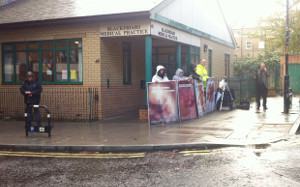 Naively, given that it is such a delicate issue, I had thought that the abortion debate was over in the UK, or at least that it had reached a sort of plateau.

Opposition voices have not come close to making any serious changes to the Abortion Act since it was amended in 1990 to reduce the time limit to 24 weeks.

But according to the British Pregnancy Advisory Service (BPAS), there has been a surge in the amount of anti-abortion activism taking place outside clinics.

Women attempting to discreetly access a lawful health service are regularly subjected to placards showing pictures of dismembered foetuses, or lists of misleading information about abortion.

Many women have reported being followed and bombarded with questions as they enter or leave the clinic, and protesters have used tripod-mounted cameras to threaten and intimidate women.

The problem is such that the BPAS have called for ‘buffer zones’ to be put in place around abortion clinics.

“What’s interesting about this debate is that it is starting to resemble the battle over abortion rights in the United States.

“The debate is increasingly becoming one of competing rights, with each group pitting their rights against the other. On the one hand, we have the right to free speech, but on the other we have the rights of women to control their own bodies.”

Last month Bernadette Smyth, founder of the Northern Irish pro-life group Precious Life, was found guilty of harassing the director of the Marie Stopes clinic in Belfast, in what the judge called a ‘vicious and malicious’ campaign.

Smyth’s case is interesting because it represents one strand of the contemporary abortion debate in British media, the question of what constitutes an infringement of free speech in this highly emotive area.

Pro-life groups have expressed ‘concern’ that Smyth’s freedom of expression has been curtailed, but it is not an offence to free speech to stop somebody from harassing, bullying and threatening somebody else. Protesters outside clinics are not there to debate; they are there to judge and intimidate.

Pertinently, their actions are not effective – this kind of campaign is not going to get the law changed, and the protesters know it. That is not why they are there.

People have every right to campaign for a change in abortion law – even to campaign based on extremist views. They have representatives in parliament – debate can, and should, take place through these proper channels.

The Oxford University debate that was cancelled last month was a proper channel. Two opposing viewpoints were being expressed – what other way is there to discuss serious ethical issues?

Perhaps it was a poor decision by the OSFL to have two male speakers, but we have to allow for debates such as this, precisely to ensure that people who harass pregnant women cannot legitimately say that pro-life activism is being silenced.

Revoking the platform for the Oxford debate sent the message that there is no difference between discussion and bullying, playing right into the hands of people like Bernadette Smyth.

The second way that abortion has been debated recently is in relation to Scottish devolution. Earlier this week Labour MP Maria Eagle hit out at suggestions that the power to change abortion laws could be devolved to Holyrood. She objected especially, she said, to ‘a bunch of men’ deciding what women could do with their bodies.

It is worth noting here that the fact men get to make the decisions on abortion is symptomatic of a wider gender imbalance in politics and the media. The students who cancelled the Oxford debate made it seem as if men were being especially consulted ahead of women on only this issue, which is not the case.

Politicians with the power to make these decisions are men simply because there are more men in politics. This needs to be addressed separately.

The issue has highlighted the fact that Scotland has a much stronger religious presence than England and Wales, prompting fears among pro-choice activists that devolution could mean constricted abortion laws.

In 2008 the SNP gave into the Catholic Church’s opposition to the HPV vaccine for girls – the Church opposed it on the grounds that it promoted promiscuity.

A 2000 report by the Scottish government concluded:

“Around a third of men and women thought abortion was wrong whilst about one in five viewed it as being rarely or not wrong at all. This is a much higher response compared to England and Wales.”

Tighter abortion laws in Scotland could lead to a rise in what has been dubbed ‘abortion tourism’. The UK Department of Health released statistics that showed that between 1980 and 2008, at least 137,618 women travelled from Ireland – where abortion is illegal – for abortion services in England and Wales.

The Irish Family Planning Institute (IFPA) underlines that these numbers are an underestimation ‘as not all women resident in the Republic of Ireland will provide their Irish address for reasons of confidentiality’. It probably does not need repeating that women will always seek to have abortions, and tightening constrictions simply puts them at risk of unsafe procedures.

Although the law allows for medical exceptions, the Department of Health in Northern Ireland has persistently failed to provide proper clarification on this, perhaps contributing to the amount of protest outside the Belfast clinic. Health minister Jim Wells recently proposed ten year jail sentences for women who have abortions.

A November survey of delegates at the Social Democratic and Labour Party conference found that 54 per cent of those questioned would support a relaxation of the laws in Northern Ireland.

But there has been little action to further the discussion, except from hardliners seeking to keep the law, or even make it stricter. The recent debate in parliament has not considered Northern Ireland, the part of the UK where women are most affected by abortion legislation.

Before worrying about what Scotland would hypothetically do about abortion, politicians should pay attention to the ongoing distress and risk that thousands of women within the UK are already facing.

Any woman who wants an abortion should have the right to have one safely and without being abused. As Ann Furedi, chief executive of the BPAS says:

“There is absolutely no need for the space outside clinics to become a battleground. Wherever one stands on abortion – pregnant women deserve better than this.”

5 Responses to “How the UK’s abortion debate was revived”