The relationship between bonus increases and profit growth is virtually non-existent. 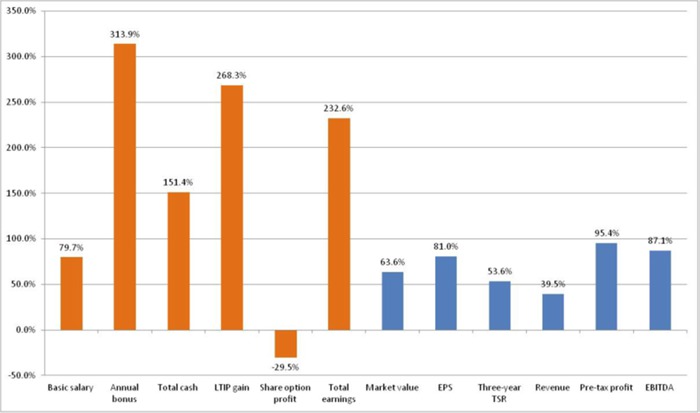 There are a number of difficult questions to grapple with when trying to establish whether or not the increasingly extraordinary sums of money paid to a super-rich elite in a handful of leading professions are ‘fair’.

Can one or two individuals really be responsible for the success of organisations employing thousands of people on multiple continents? Are the markets for executives, lawyers, bankers and consultants completely transparent, open and functional?

Is there a limit beyond which we might consider the gap between rich and poor to be intolerable, grotesque or socially and economically destructive?

But each of these questions rests upon the assumption that those at the top are paid, at least ostensibly, in proportion to their success.

It may be that executives claim sole credit for the achievements of an entire company. Perhaps their God-like genius is over-valued by uncritical remuneration committees and asset managers who have a vested interest in keeping top pay racing upwards.There is considerable support for the idea that a more unequal society is divided, weak and unfair. But ultimately, the assumption is that pay is going up because performance is too.

In fact, this is far from the case. New research carried out for the High Pay Centre by Income Data Services examined median pay increases for FTSE 350 directors compared to the increase in company performance, as measured by a series of metrics used by the corporations themselves to calculate executive bonuses and incentive payments. The results are summarised in the chart below. 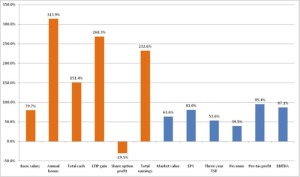 Bonuses are usually measured against some form of profitability, while LTIPs are linked to three year changes in ‘earnings per share’ (related to company income) and increases in ‘Total Shareholder Return’ (calculated using share price changes and dividend payments). In each case, the increase in payment was totally disproportionate to the relevant metric. The relationship between bonus increases and profit growth was virtually non-existent. 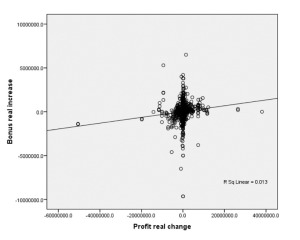 The obvious conclusion is that pay at the top has become a self-enriching racket, with the remuneration committees that set pay happy for executives to enjoy a windfall when the economic going is good, then reducing targets so they can cash in during leaner times as well. Company workers and shareholders are being ripped off as top bosses are lavishly rewarded while failing to grow the wages or savings of ordinary people.

The problem is that shareholders have thus far proved difficult to mobilise against top pay – partly because the holdings and voting rights on pay are controlled by wealthy fund managers – and the workforce have no say in the process.

Putting workers on remuneration committees might be one place that government could start reforming the culture of unjust rewards. Mandatory publication of company pay ratios, measures to strengthen trade unions and coercion or incentives designed to increase the prevalence of workforce-wide profit sharing would be good ways to follow this up.