When it comes to representative democracy, Parliament could learn a thing or two from Europe. 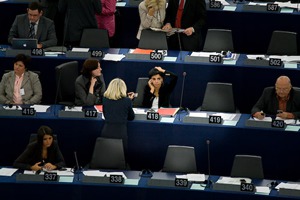 When it comes to representative democracy, Parliament could learn a thing or two from Europe

I would love to see British ministers, when they are appointed, have to go for a three-hour public grilling by the relevant parliamentary committee before they take office.

It would highlight shortcomings, reveal agendas, hear their aspirations and occasionally see one or another come a cropper.

Yet this is precisely the process going on in the European Parliament, as prospective members of the new European Commission appear in public hearings before it votes on whether to give confidence to the new Commission, allowing it to take office. From Britain’s Lord Hill to the four former prime ministers who are hoping to get through unscathed, none can afford to take this lightly.

The three-hour hearings are rigorous and often dramatic. Committees of MEPs, each packed with experts in the candidate’s own policy area and drawn from across the political spectrum, cross-examine each individual nominee. Candidates are challenged to declare their financial interests, explain their political priorities, defend their planned programme of work, and in some cases justify their very appropriateness for the office of Commissioner in the first place.

The European Parliament has been cross-examining Commissioner candidates in this way for nearly two decades. The process has frequently resulted in changes to the proposed line-up of Commissioners: policy areas have been reshuffled, portfolios have been swapped, and more than once a candidate has been rejected outright, sending the relevant national government scurrying back to the drawing board to submit a replacement.

Of course, the European Commission is not the all-powerful body that many people in Britain believe it to be. Its role in EU lawmaking is limited to producing first drafts and then implementing the will of elected national governments and the directly elected Parliament. Nonetheless, the 28 Commissioners are influential, with wide-ranging portfolios – so we MEPs take our role in their job interviews very seriously.

Already, some candidate Commissioners are in the firing line. Five have not yet been approved by the committees that grilled them, who have instead requested further information or clarifications. They may not in the end reject them — and even if they do, the final vote is by Parliament as a whole on the Commission as a whole — but the pressure is on.

The Hungarian and Spanish nominees have caused particular concern, and Lord Hill, despite a very good hearing, faces serious questions from some quarters about how he intends to approach financial sector regulation when many MEPs see him as too close to the City.

It is not just about the individuals. There will be pressure to move the responsibility for medicines and pharmaceuticals back to the health portfolio (it has been astonishingly transferred to ‘enterprise’!). There will be further attempts to seek promises and commitments in response to major concerns.

It’s instructive to compare this process with how things work at Westminster. Reflect for a moment on the fact that no British government ministers are directly elected to their positions, and indeed some of them, being Lords, have never won an election in their lives. They hold office by virtue of being appointed by the Prime Minister and the Commons giving confidence to the government as a whole.

How illuminating it would be, then, if the Commons took a greater interest in ministerial appointments and submitted ministers to close questioning in public confirmation hearings before they could take office! What a powerful statement that would be of the authority of the electorate over the government of the day!

I’m not holding my breath. But when it comes to putting representative democracy in action, our venerable Houses of Parliament still have one or two things to learn from their younger sibling across the Channel.

21 Responses to “A lesson in democracy – from the European Parliament”