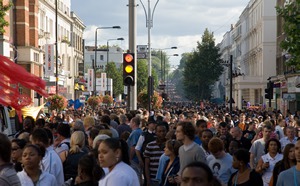 The report over child abuse in Rotherham is horrific. Amongst the many things we must learn from it is that a certain type of communal identity politics multiculturalism that inhibits addressing social problems must be opposed by the Left. The details are shocking:

“Jahangir Akhtar, the former deputy leader of the council, is accused in the report of naivety and potentially “ignoring a politically inconvenient truth” by insisting there was not a deep-rooted problem of Pakistani-heritage perpetrators targeting young white girls. Police told the inquiry that some influential Pakistani councillors in Rotherham acted as barriers to communication on grooming issues.”

“There was too much reliance by agencies on traditional community leaders such as elected members and imams as being the primary conduit of communication with the Pakistani-heritage community.”

Whilst this kind of expenditure may be good intentioned, we must ask if ideological multiculturalism as a political, social policy leads to a situation in which a cover up of uncomfortable issues becomes inevitable. When this happens, suffering and abuse occurs, and rather than dealing boldly with it, what results is a pattern of denial, obfuscation and continuance.

Multiculturalism concerned exclusively with communal religious identity politics, pursued as a social policy, is deeply reactionary and leads to the oppression of women who feel its effect most acutely. It dehumanises us all, because it asserts that we are not individuals, but members of religious or ethnic groups who must be dealt with according to the mediated authority of ‘community leaders’. It creates inhibitions from confronting social attitudes that must be addressed urgently, and in doing so, it allows social problems to flourish.

In this case, it led to 1400 girls being sexually abused for a prolonged period of time, because of a warped sensibility of identity politics and multiculturalism.

The logic of communal religious identity politics leads to worsened social cohesion. By covering up problems they fester, and when they come to light eventually, institutions are corrupted and trust in wider society damaged.

Amartya Sen, the Nobel prize winning economist, discussed how reactionary and damaging British forms of multiculturalism as a social policy have been, thus:

“I am not opposed to multiculturalism … But I am opposed to the way it has been interpreted. There are two basically distinct approaches to multiculturalism. One concentrates on the promotion of diversity as a value in itself. The other focuses on the freedom of reasoning and decision-making, and celebrates cultural diversity to the extent that it is freely chosen. The way that British authorities have interpreted multiculturalism has very much undermined individual freedom. A British Muslim is not asked to act within the civil society or the political arena but as a Muslim. His British identity has to be mediated by his community.”

A further danger is that this kind of policy and practise leads to a counter-reaction, and the far-right begins to mimic the rhetoric and ‘logic’ of communalist identity politics. It therefore separates people, rather than uniting us as a society.

But it is in the realm of women’s rights that multiculturalism, of the communalist identity politics variety, is most reactionary as a force for oppressiveness. In the past this has mainly been because of issues like honour / shame violence, oppression, and forced marriage. In the case of Rotherham it meant that girls being abused in a systematic way had their suffering prolonged because of the inverted priorities and instincts within civicl institutions.

In 2008 Pragna Patel of the Southall Black Sisters wrote about the catastrophic effects of communal religious identity politics on women’s rights, and the need for the Left to defend the secular space. Six years on, we are still engaged in this struggle.

“The result is a shift from a ‘multicultural’ to a ‘multi-faith’ society: one in which civil society is actively encouraged to organise around exclusive religious identities, and religious bodies are encouraged to take over spaces once occupied by progressive secular groups and, indeed, by a secular welfare state.

In the process, a complex web of social, political and cultural processes are reduced by both state and community leaders into purely religious values, while concepts of human rights, equality and discrimination are turned on their head.

The problem with the state accommodation of religion – even so called moderate religious leaderships – is that they work against and not for equality and justice.”

The taboos that this form of communalist identity politics engender lead to the perpetuation of reactionary attitudes and effects. The damage it can do to our social fabric, trust, and individual freedoms is an attack on everything that the Left should be defending.

The time has come for the British Left to actively defend the secular space and oppose the assumptions and practise of reactionary communalist identity politics as a social policy, and truly cosmopolitan values that reject cultural and moral relativism must be central to our movement.

Al Razi is a member of the Ex-Muslims Forum