Denial and deflection over extremism is a disservice to Muslim communities. 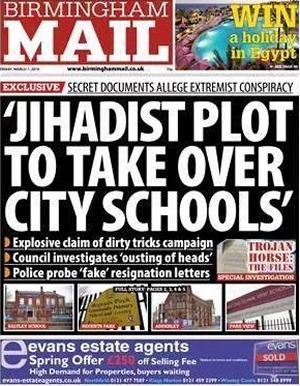 Denial and deflection over extremism is a disservice to Muslim communities

One of the most frustrating and depressing aspects of following extremism-related stories in the UK is the predictable frequency with which the denialist brigade rush to the fore to hush things up.

Whilst the twin towers in New York were still smouldering, we had this brigade trying to convince us it was an inside job. The day after 7/7 the same suspects were out in force claiming it was a MI5/MI5/CIA/Mossad operation, they can never quite decide which agency was involved but they are sure it was one of them.

It, therefore, should come as no great surprise that in the wake of numerous inquiries into the Birmingham Trojan Horse affair the denialists are back to their old tricks.

It must be stressed that both the Ofsted and Peter Clarke inquiry found that there was a concerted attempt to impose an extremist Islamist agenda on Birmingham state schools by a group of men linked with Islamist organisations.

–          Extremist speakers being invited into schools without being vetted

–          The promotion of homophobia, sexism and anti-Semitism amongst the teachers and governors involved in the plot

The reports are very clear about what was found and are available to read here and here. Following on from their publication, the Guardian decided to post a mind-blowingly inaccurate piece by former-Respect leader, Salma Yacoob, that made the following claim:

“The residents of Birmingham ought to be able to sleep more easily tonight. Peter Clarke’s 129-page report into the city’s schools found no evidence of plots to indoctrinate, groom or recruit school pupils to an agenda of radicalisation, violent extremism or terrorism. This is also the key finding of the reports commissioned by Birmingham city council and Ofsted.”

Clearly teaching children to hate non-Muslim, women, gays, Jews and the West in general is not extremist or a sign of radicalisation in her view. Salma is not unintelligent or unable to read which implies she is deliberately seeking to mislead the public about the true nature of what has been happening in Birmingham. She is not alone.

Salma is pipped to the ‘Britain’s most dishonest Muslim spokesperson’ spot by Myriam Francois-Cerrah. After pointing to some of the findings in the reports, Francois-Cerrah writes:

“But what the problem is not, is an issue of radicalisation. Rather, attempts to link the problems to radicalisation reflect an expansion of the counter-terrorism agenda to the policing of socially conservative views among some Muslims and the effects of this policy are likely to be disastrous.”

Converts like Myriam appear keen to absolve Muslims of all responsibility and remind non-Muslims that it is their ignorance that causes stagnation and extremism in Muslim communities.

Interestingly, both Salma and Myriam began their commentary on Trojan Horse affair when it was first covered by the press earlier this year, by claiming there were no problems at all and the plot was a figment of Michael Gove’s imagination. So I guess we have some progress.

Not to be outdone by the Salma and Myriam, the Muslim Council of Britain then entered the fray and reminded us all of just why they have become so irrelevant in recent years with this gem of wisdom:

“…we do take issue with Mr Clarke’s approach that chooses to ascribe guilt by association, and by conflating conservative Muslim practises to a supposed ideology and agenda to ‘Islamise’ secular schools.”

What Salma, Myriam and the MCB need to understand is that you can’t pull the wool over people’s eyes on every single occasion. Denial and deflection over extremism is not a public service, it is a disservice to Muslim communities and it strengthens the hand of extremists. It also gives fodder to the far-right who use the denials of such spokespersons to push divisive narratives.

Extremism is clearly a problem in British Muslim communities and readers of this blog don’t need any further proof of that assertion. This problem can only be solved if it is exposed, discussed openly and challenged.

It will continue to fester if it is denied, defended and covered up. No matter how inconvenient or uncomfortable certain truths may be they still need to be faced.

Muslim spokespersons, like the ones mentioned in this post, need to move on from their tribal mind-set and stop construing all discussions about extremism as an attack on all Muslims. There is no ‘us vs. them’. We need to work together as a society, not get defensive and attack anyone who seeks to challenge real problems in communities. Please!