The NHS is in 'crisis', according to today's Sun. But is it really? Or at least, is it in the way the Sun is arguing? 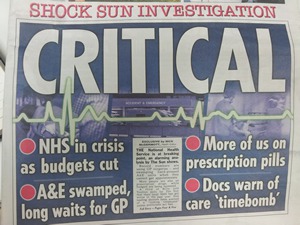 The NHS is in ‘crisis’, according to today’s Sun. But is it really? Or at least, is it in the way the Sun is arguing?

‘NHS in crisis’ – that’s The Sun’s verdict on the health service today. The paper points to “A&E swamped, long waits for GP” and a care “timebomb”.

This alarming analysis by The Sun dominates their main news coverage. They’re clearly searching for problems – “are you a media with a horror story about the NHS? Call our newsdesk”, page five screams.

Most of the ‘research’ is already publicly known. They provide a breakdown of “how your money is spent”, the “5 most expensive conditions” (of which, bizarrely, mental health is lumped into one category to be contrasted with cancer and arthiritis), and some Royal College of GP stats on appointments.

Most of the original material comes from a YouGov poll for the paper, which says a third people think their NHS services have got worse in recent years.

Yet this is an engineered crisis. Here are five reasons why not to trust the Sun’s attempt to undermine the service:

1. There’s a motive behind this coverage

Why are they running this three-day series on their ‘crisis’ in the NHS now? The editorial on page eight explains the paper’s intentions:

“[The NHS] needs radical reform to survive…It must be reinvented with a far greater role for the private sector in treatment and care.”

“The old NHS model is failing and will only deteriorate.”

And the final Thatcherite coup de grace – “There is no alternative.”

So Murdoch’s mouthpiece is talking down the NHS to prepare it for privatisation, much as British Rail was driven down by the right before its sell-off, or how the coalition claimed Royal Mail needed significant ‘new investment’ despite operating on a £400m profit. Only a cynic would suggest the Tory-linked paper would be doing the Conservative’s chosen bidding…

2. There is no financial crisis in the NHS

The National Audit Office’s most recent report into the NHS’ finances says that the NHS is operating a pretty large surplus. It is not, therefore, technically in need of a major new [private] cash injection’. The health service is running on a £2.1bn surplus for the June 2012 to June 2013 year. But the report also revealed there is “a substantial gap between the trusts with the largest surpluses and those with the largest deficits”.

Why? Because the trusts, being broken-up semi-autonomous units by their very nature, cannot redistribute funds within the service. Splitting up the NHS into independent bodies was a key part of Labour’s push to quasi-privatise elements of the service – exactly what The Sun wants more of.

3. Even the US people think the NHS is the best health care system

A report out earlier this month by the US-based Commonwealth Fund found that the UK is the first out of the richest eleven countries for its health-care system – far ahead of the private sector-dominated US system. It ranks first on quality of care, efficiency (overall cost by GDP) and low cost at the point of service (direct ‘cost’ to the patient – i.e. free in the UK). The US came last.

4. The ‘crisis’ – if there is one – is partly a result of government cuts and privatisation

Despite NHS funding being maintained by the government, it is not matched to demand. Therefore the system is having to deal with increased demand while funding remains the same. Anyone would understand this is a recipe for disaster.

Even the government’s National Audit Office says it is “not clear” whether the cuts are sustainable, with £20bn of savings forced upon the service by 2015. 7,000 nurses have been axed since 2010 – that’s inevitably going to have a huge impact as understaffing bites.

Meanwhile the government’s Health and Social Care Act has forced thousands of new expensive tendering processes, while the Transatlantic Trade and Investment Partnership threatens that private firms may soon sue for lost business if services stay in public hands – potentially costing billions to the tax-payer.

This magic private-sector investment The Sun trumpets poses a question – why would companies ‘invest’ in the NHS? Either they would simply be providing services still paid for through tax (while reaping a handsome profit at our expense) or through direct funding at the point of use – completely undermining the NHS’ core value of being free for everyone.

Instead of lining the pockets of Circle, Serco or Richard Branson’s Virgin Healthcare, coping with an ageing population, obesity and GP waits could be dealt with by doing the unthinkable – raising tax. It should be done progressively, but if there is a ‘crisis’ in health it should be done.

The Lib Dems have, to their credit, been brave enough to suggest this yesterday following Labour’s lead. The public support the idea – now it’s up to parties ostensibly against privatisation to get it firmly on the agenda.

19 Responses to “The Sun: preparing its readership for NHS privatisation”