The Bedroom Tax U-turn is about dire Lib Dem poll ratings, not principles. 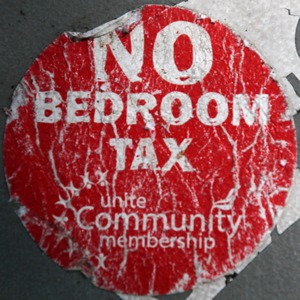 The Bedroom Tax U-turn is about dire Lib Dem poll ratings, not principles

The Liberal Democrat U-turn on the Bedroom Tax is less about the policy not working and more about the party’s poll ratings.

The move is certainly welcome for those who’ve been campaigning against the punitive policy: new data from an internal government review has shown that almost 60 per cent of households affected by the Bedroom Tax were in arrears due to a shortage of smaller properties to move into.

The question is, why now?

There is no shame in changing your mind, and the Lib Dems are parroting the old line about changing their minds because the facts ‘on the ground’ have changed.

The problem however, is that in order to believe this one has to accept that the Lib Dems had no clue there would be problems such as that cited above from the very beginning. But how could they not? A DWP assessment conducted prior to the introduction of the Bedroom Tax found that 31 per cent (660,000) of social housing tenants would have their housing benefit cut as a result of the Bedroom Tax.

There simply weren’t enough smaller houses for people to downsize to (which the Department of Work and Pensions acknowledged).

And consider this, too: according to Number 10 sources, not a single Lib Dem minister argued privately against the Bedroom Tax when the policy was being pushed through by the government.

So much for a principled change of heart.

No, the real reason for the Lib Dem volte face becomes clearer when one looks at something else entirely: the polls. In recent days, and coinciding with their u-turn on the Bedroom Tax, the Lib Dems have been polling at their lowest ratings since 2001, at just 6 per cent.

Which is more likely, then: that Lib Dem ministers who happily voted for the Bedroom Tax knowing what the probable outcome would be have been hit by a suddent jolt of principle? Or, alternatively, that they have seen the polls and panicked?

Some commentators, such as the Telegraph’s Dan Hodges, will  probably say that promising to repeal the Bedroom Tax isn’t a vote winner.

They’d be wrong, though.

Looking at the polls, there is ample evidence that the public (even those not affected by the policy – shock horror) don’t like the Bedroom Tax. Look at this for example, from April/May (ht Mike Smithson): 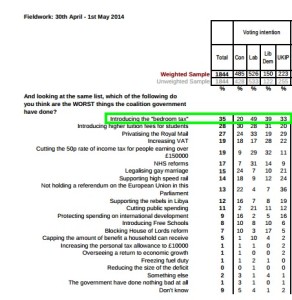 What’s the worst thing the coalition has done? The Bedroom Tax, say the public. What can we do about our worst poll ratings for almost 15 years? asks Danny Alexander. We can say something about the Bedroom Tax, says Nick Clegg.

This is about poll, not principles.