There's very little evidence of the 'magnetic pull' of our benefits system. But there is evidence which suggests the Prime Minister wants to win back disillusioned Tory voters who've been attracted by UKIP. 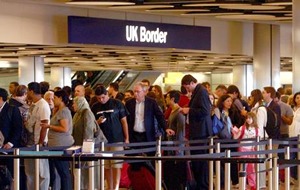 There’s very little evidence of the ‘magnetic pull’ of our benefits system. But there is evidence which suggests the Prime Minister wants to win back disillusioned Tory voters who’ve been attracted by UKIP

Another day, another announcement about tightening benefit rules for EU migrants.

Writing in the Telegraph today, David Cameron says the “magnetic pull” of UK benefits needs addressing so that people come to Britain for the right reasons.

Immigration should “put Britain first”, he writes, before setting out plans to ensure that EU migrants will be unable to claim benefits for more than three months unless they have “clear job prospects”.

It should be obvious by now that these sorts of announcements are about politics more than they are about money. It’s about the ongoing attempt to lure back disenchanted right-wingers who have been drawn to UKIP like wasps to a jam jar.

I say that because most migrants from the EU do not come to Britain to sign on, but to work. That isn’t conjecture; it’s what the statistics say. And this is what you would expect – who spends hundreds of pounds on a flight and uproots themselves from their home and family to claim a relatively small amount of money in another country?

But Britain has the ‘most generous welfare system in Europe’, I can hear you say. Well not according to the Economic and Social Research Council’s Centre for Population Change (CPC): 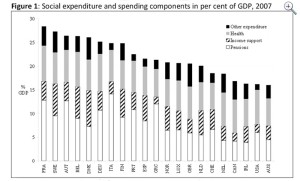 There are a number of other EU countries that are just as likely as Britain (if not more so) to exercise a ‘magnetic pull’ on migrants.

EU migrants cannot simply sign on to claim Jobseekers Allowance, either, but must pass a tough Habitual Residence Test set before they can make a claim.

UK nationals are more likely to claim benefits than foreign migrants right across the board, as the Guardian reported last year (and as the graph from FullFact demonstrates):

“Of the 2 million net migrants to the UK from the eight eastern European countries that joined the EU in 2004, just 13,000 people have claimed jobseeker’s allowance (JSA). This figure was not disputed by No 10.” – The Guardian, March 26 2013. 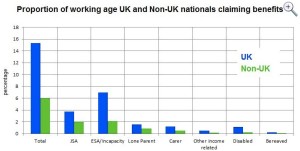 Last year a European Commission report concluded that there was no evidence of systematic or widespread benefit tourism by EU nationals migrating within the EU, including to the UK.

It’s fitting that Cameron should choose the Telegraph for today’s article. Last year the paper falsely claimed that there were over 600,000 unemployed EU migrants in the UK. However as this DWP report from last year demonstrated, the number of EU migrants claiming Jobseekers Allowance – the main UK unemployment benefit – in February 2013 was 60,100 – a tenth of the number described by the Telegraph as ‘unemployed’.

‘Unemployed’ also doesn’t automatically mean ‘claiming benefits’. A European Commission report from last year found that 84 per cent of non-active EU migrants in the UK were relatives of an economically active EU national, meaning they were almost certainly mainly being provided for by spouses, partners and parents (children over 15 and students are included in the figures).

Last year the Telegraph itself was unable to find a single migrant that had come to the UK with the specific intention of claiming benefits. It could only find those who has previously worked but who had signed on after losing their job. And why shouldn’t they do that? They’ve been paying into the system, after all – and that’s at least partly what the safety net is there for in the first place – to help those who’ve made a contribution when times get tough.

In reality there is very little evidence (none that I can find) of the ‘magnetic pull’ of our benefits system. There is quite a lot of evidence, though, which suggests the Prime Minister wants to win back former Tory voters who’ve been attracted by UKIP.

40 Responses to “Message to David Cameron: you have no evidence the benefit system acts as a ‘magnetic pull’”