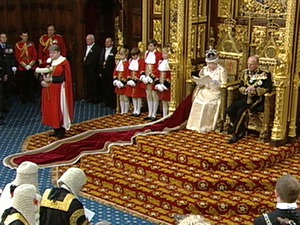 Some predicted there would be mention of the right to recall MPs in today’s Queen’s Speech, and they were right.

Yet rather than announcing a democratic measure whereby constituents would have been able to deselect a useless/lazy/currupt MP, the government is essentially introducing a fudge.

Under coalition plans announced today and to be brought in before the 2015 general election, constituents will be able to sack their MP if they are sentenced to up to 12 months in jail. They will also be able to trigger a by-election if the House of Commons decides that an MP has engaged in “serious wrongdoing”. A vote would be forced if more than 10 per cent of constituents signed a petition over a two month period.

In other words, an MP would have to have committed an offence and parliament would have to agree to it before constituents have any right to recall that MP.

As you’ve probably worked out by now: that doesn’t really add up to the right of constituents to recall their MP. It also goes against a promise made in the coalition agreement.

As the original coalition agreement stated on page 27:

“We will bring forward early legislation to introduce a power of recall, allowing voters to force a by-election where an MP is found to have engaged in serious wrongdoing and having had a petition calling for a by-election signed by 10 per cent of his or her constituents.”

As Zaz Goldsmith has pointed out, this isn’t a truly democratic measure, this is a “cynical stitch-up”.

“True recall is simple. If a percentage of constituents – usually 20 per cent – sign a petition in a given time frame, they earn the right to have a referendum in which voters are asked if they want to recall their MP. If more than half say yes, there is a subsequent by-election.”

5 Responses to “The Queen’s Speech: not a recall bill, but a fudge”