There is a 1 in 3 chance that someone elected as a UKIP MEP will no longer be a party member by the time of the next election. 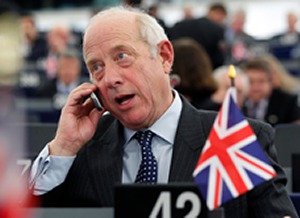 From a democratic perspective, it is problematic when elected politicians change parties. If the public have voted for a member of a certain political party to hold office, arguably they have a right to expect that they will remain a member of that party for their entire term.

The Conservative MP Chris Skidmore is alive to this point, and has recently proposed that defecting MPs should face an immediate by-election. The same could be said for those occasions where an MP is expelled from their party, or resigns. There is no requirement for a by-election to take place, although in some cases MPs have voluntarily triggered a new vote after switching allegiances.

This problem is sharpened when we consider European Parliament elections, where UK voters can only vote for a party list rather than an individual candidate. MEPs, therefore, cannot lay claim to the same personal mandate than an MP has.

Despite this, party-switching has been relatively common among British MEPs in recent years. In the past ten years, 13 MEPs have ended their term of office in a different party to the one they started it in. When we look closer at the figures, however, we see that this phenomenon is largely down to one party in particular: UKIP.

UKIP has been very successful in recent European Parliament elections, winning 12 seats in 2004 and 13 in 2009. But following both elections, the party struggled to keep hold of its MEPs. In total, since 2004 eight UKIP MEPs (32 per cent)have left the party during their five-year term, meaning that there is a 1 in 3 chance that someone elected as a UKIP MEP will no longer be a party member by the time of the next election.

In contrast, only 6 per cent of Conservative MEPs have changed parties, while no Labour or Liberal Democrats have done so. Out of all party changes among British MEPs since 2004, 62 per cent have been MEPs leaving UKIP.

Tom Wise, meanwhile, was ejected from the party following a series of revelations  involving his expenses, a business account, a secretary, and a dark green Peugeot 406. Subsequently, he was caught in a News of the World sting operation making a number of politically disadvantageous comments about his role and his expenses, including what appeared to be a full and frank admission of his dubious attitude towards the MEPs expenses system. He was eventually jailed for one year and had to pay £30,000 toward the prosecution’s costs.

Ashley Mote, elected as a UKIP MEP for the South East in 2004, also found himself facing allegations of fraud following allegedly improper claims for over £60,000 income support and housing benefit. He was eventually sentenced to nine months in prison. Prior to his early release, he was allowed to remain a Member of the European Parliament. Like Wise, he was deselected by UKIP and stood down at the 2009 European Parliament election.

The party has lost five MEPs (Godfrey Bloom, Nikki Sinclaire, Mike Nattrass, David Campbell-Bannerman and Marta Andreasen), in the 2009-2014 term, although it has also gained one (Roger Helmer).

Godfrey Bloom, the famed controversialist MEP for Yorkshire and Humber eventually resigned from UKIP, following a series of high profile gaffes, most notably attacking Channel 4’s Michael Crick with a conference brochure, and referring to two women as ‘sluts’ at the 2013 UKIP Party Conference. He is also well known for directing Nazi slogans at German members of the European Parliament, referring to aid recipient nations as “Bongo Bongo Land”, and claiming that public sector workers and the unemployed should be denied the vote. He now sits as an independent, and will not be seeking re-election.

Nikki Sinclaire was ejected from UKIP following her resignation from the party’s European Parliament grouping, the European Freedom and Democracy group, owing to what she perceived as racist, xenophobic and extremist views from some of the members. She has also alleged that Nigel Farage has bullied her and other colleagues over a twenty year period. She had intended to remain a member of UKIP but was instead deselected. She subsequently formed the ‘We Demand a Referendum Now Party’, which is yet to gain any members beyond Sinclaire.

Her fellow West Midlands MEP Mike Nattrass has also left the party, following his failure to pass a newly imposed ‘candidates test’ in 2013. He briefly looked as if he may join the English Democrat Party, even going so far as to speak at their conference, however he instead launched the curiously named ‘An Independence Party‘ for which he will stand for re-election at the European Elections under the name ‘An Independence from Europe’.

David Campbell-Bannerman, meanwhile, opted to return to the Conservative Party following his previous defection in the other direction. In doing so, he decried UKIP as “not a serious political party”. He had previously stood for the leadership of UKIP, but finished third behind Nigel Farage and Tim Congdon.

A week before Campbell-Bannerman’s defection came that of Martea Andreasen, who also left UKIP for the Conservative Party. In doing so, she described Nigel Farage as a “Stalinist”and “anti-women”, while criticising the “sycophants” that surrounded her previous leader. She was rather kinder about David Cameron, praising his ability to take in new ideas and pursue a course that was right for the country. She may be a fan now, but that wasn’t always the case.

The recent debates between Nigel Farage and Nick Clegg seem to have signalled UKIP’s arrival as a major party in British politics. If they are to make the break into the mainstream, Farage will be very eager to put the era of ceaseless defections,sackings and resignations behind him. Otherwise, any MPs the party does manage to get elected to Westminster in 2015 might not be staying on the UKIP benches for very long.