New polling data has revealed that the Yes to Scottish independence camp has managed to cut the lead of the No campaign to just 5 per cent. 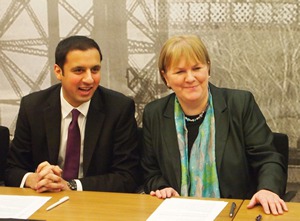 New polling data has revealed that the Yes to Scottish independence camp has managed to cut the lead of the No campaign to just 5 per cent.

According to the figures compiled by Panelbase, 41 per cent of respondents expressed support for independence compared to 46 per cent who opposed it and 14 per cent who did not know how they would vote.

The new data came as it was revealed that Labour will be looking to make a greater use of its Scottish big hitters in the House of Lords ahead of September’s referendum. According to reports, following a meeting between Ed Miliband and the deputy leader of Scottish Labour, Anas Sarwar, Sarwar has asked the former MP and MSP Lord Foulkes to mobilise Scottish Labour peers.

Among those thought to be being lined up to take on a greater role are ex-cabinet ministers John Reid, George Robertson and Helen Liddell, along with the Jack McConnell, the former Scottish first minister.

Dubbing such figures a “legends”, Sarwar has said of the decision:

“This is the fight of our lives – we need the collective strength of the Labour movement to come together to win this for Scotland.

“The whole of Team Scottish Labour – the youth team, first team and legends – are coming together to make sure we run the biggest and most effective campaign we have ever done.”

Meanwhile, one of the Peers mentioned, the former NATO secretary general Lord Robertson has warned that Scotland leaving the UK would be “cataclysmic in geo-political terms”. Speaking to the Brookings Institute, he explained:

“The loudest cheers for the break-up of Britain would be from our adversaries and from our enemies.

“For the second military power in the west to shatter this year would be cataclysmic in geo-political terms.”

In hinting at growing concern in the US at the prospect of Scotland voting for independence, he called on the UK’s allies to speak loudly and make their concerns known. He continued:

“This is not a purely domestic matter even though it’s a decision that will be taken by the Scottish people.

“The Scottish people need to be conscious that they are taking a decision, not just for themselves and for future generations in a one-off vote, but that it also has an effect elsewhere and people who are affected, or think they will be affected, have every right to speak out.”

4 Responses to “Scottish Labour ups its game on independence”