Eric Pickles's comments on 'militant atheists' belie an ignorance as to what secularism is, writes Matthew Broomfield. 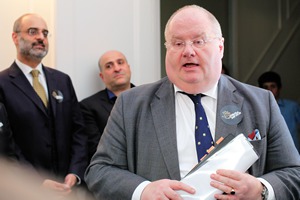 Eric Pickles’s comments on ‘militant atheists’ belie an ignorance as to what secularism actually is, writes Matt Broomfield

“We’re a Christian nation”, Conservative party chairman Eric Pickles recently told the party’s spring conference. “We have an established church. Get over it. And don’t impose your politically correct intolerance on others.”

These comments belie an ignorance of the rights and freedoms available to religious believers of all denominations under a secular system. He is not alone in failing to understand the positive impact of constitutional secularism on liberal democracy.

Narendra Modi, the Hindu Nationalist expected to triumph in the ongoing race to become prime minister of India, has a track record of nurturing anti-Muslim sentiment. In 2002, an anti-Muslim massacre in the state of Gujarat (where Modi is chief minister) resulted in over 1,000 deaths.

At the time of the pogrom, Modi did little to check the violence, and spoke out against opening relief camps for those affected. Last year, he said he cared about the deaths of these Muslims as much as he cared about a puppy being run over by a car. If he is elected, he will have been borne to power on a tide of anti-Muslim sentiment. Secularism insists that there is no place for this type of sectarian hatred in public discourse.

The exam watchdog Ofqual and the Joint Council for Qualifications are currently meeting with Muslim groups to discuss the possibility of moving exam dates in 2016, when they will clash with the day-long fasts of Ramadan. A secular system allows for compromise: Muslim pupils have the right to engage in the private religious practice of fasting and the right to take their public exams at full strength, yet at the same time they must not be allowed to gain an unfair advantage over non-Muslim pupils.

This dialogue between faith groups and the government is an often-overlooked aspect of state secularism. It recognises the importance of religious belief on a personal level, and seeks to accommodate all belief systems into society without allowing them to negatively affect state policy or the rights of other citizens.

If religious institutions were subject to the same rules of taxation as other organisations, they would contribute significantly to the national economy. There may be as much as $100,000,000,000 of untaxed church property in the United States, and Nebraskan senator Ernie Chambers has recently tabled a motion to try and access the currently untaxable wealth bound up in the roughly 3000 untaxed religious properties in his home state. The Church of England alone is worth around £5,000,000,000, and a secular reform of religious taxation policy in the UK would allow the government to tap into this wealth.

Ultimately, perhaps Pickles might best be persuaded by the bottom line, as the religious institutions of Britain follow Biblical precedent and render to Caesar what is Caesar’s.

It merely gives atheism an equal footing alongside other belief systems. The aggressive anti-theism of the Hitchens-Dawkins axis (the ‘thuggish hard left’ Pickles referred to in his speech) has little to do with secularism.

In his speech, Pickles aligned secularism with the extremist doctrines of the English Defence League and militant Islam, saying “they’re all as bad as each other”. In reality, secularism is not a religious or political ideology at all, so much as it is the absence of any one dominant ideology.

In Saudi Arabia, new measures introduced by King Abdullah redefine terrorism as “calling for atheist thought in any form, or calling into question the fundamentals of the Islamic religion on which this country is based”. It is a long way from prayers in local council meetings to this totalitarian subjugation of religious minorities, but secularism exists to safeguard against religious extremism, not “appeasing” it – as Pickles claimed.

In the wrong hands, it can undoubtedly be abused in order to infringe the personal rights of citizens. “There is no reason for religion to enter the public sphere; that’s the law,” Marine Le Pen told RTL radio in France, in an attempt to justify the National Front’s plans to force Muslim schoolchildren to eat pork.

The issue here is that what an individual has for his or her lunch is not in any sense a public affair, in the way that it would be if all children were forced to eat halal meals. Secularism encourages rather than denies individual choice, and recognises that religious institutions have a role to play in society. Its focus on the separation of church and state simply serves to prevent any one belief system from affecting the rights of other individuals.

Le Pen’s brand of virulent Islamophobia is a poisonous ideology in its own right, and has no more place in the secular public sphere than Sharia law.