The radical right and radical Islamists are seen as mortal enemies. But in Europe they are increasingly finding common ground. 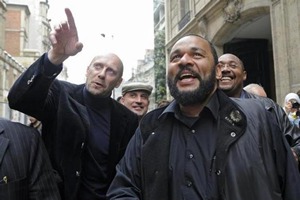 In the UK the radical right and radical Islamists are seen as obvious mortal enemies to one other, each producing the rhetoric and actions that fuel and justify the other’s stance. Just recall the negative symbiotic relation between al-Muhajiroun and the English Defence League.

Yet we often assume that this social dynamic is organic instead of seeing it for what it really is: a culturally constructed narrative of ‘in-group’ and ‘out-group’, ‘self’ and ‘other’. This is most keenly exemplified by recent developments in France, where radical right and radical Islamists are uniting, finding common ground in homophobia, anti-Semitism and conspiracy theories about Zionism.

UK-based radical right and populist political forces, whether in the form of the EDL, BNP or UKIP, hold distinct views on immigration policies, largely targeting the Muslim community as a source of discontent. On the opposite side of the spectrum, more radical Islamist groups, supporting Shariah law in Britain and the formation of a global Caliphate state, serve as ammunition in justifying the radical right’s rhetoric against Muslim communities.

Neither group represents a majority view within their communities, yet both find disproportionately large platforms to voice their stances.

Often, standing beside some of the more vocal Islamist groups is Britain’s far-left constituency. This was seen throughout the 2000s as alliances were made between the conservative Muslim Association of Britain and the Stop the War Coalition, incorporating support from the Socialist Workers’ Party alongside the Cordoba Foundation, British Muslim Initiative and others.

This alliance was vocally protested by some, saying that the coalition promoted reactionary Islam over the democratic, secular and international Muslims that make up the true majority of British Muslims. Radical right and nationalist populist forces target Muslim communities as a cause of unemployment, deteriorating national culture and a threat to security while more radical Islamist voices are given a platform among far-leftist outlets.

Meanwhile, this antagonistic relationship between radical right and radical Islamists has been flipped upside down by recent developments in France, as a mutual sentiment of anti-Semitism and traditional conservative family values unite them.

Many will remember the headlines not long ago when the now former West Bromwich Albion football player, Nicolas Anelka, was banned and fined for his ‘quenelle’ gesture during a match. The quenelle represents a reverse Nazi salute made famous by the controversial French-Cameroonian comedian, Dieudonné.

Dieudonné originally aimed his comedy at anti-racist activism, but later became increasingly open about his anti-Semitic sentiments throughout the 2000s and developed political relations with Jean-Marie Le Pen, former leader of the radical right National Front party in France.

Fast forward and the well-known foreign policy proverb ‘the enemy of my enemy is my friend’ comes to mind. Certain activists from the National Front are strongly advocating allegiances with radical Islamist conservatives. The author, film-maker turned politician, Alain Soral, is one such individual.

Previously a member of the central committee of the National Front, Soral’s most recent activism has turned towards uniting young Muslims from the suburbs of France together with radical right supporters in a fight against the ‘New World Order’, a largely anti-Zionist conspiracy theory.

Soral’s large online following, through his website and YouTube channel, are helping him promote this union in what he calls a ‘réconciliation nationale’ (national reconciliation).

The French radical right and conservative Islamist groups are also uniting against school initiatives introducing programmes to teach respect and equality between men and women in France. Although the ‘ABCD programme’ was launched by the Ministry of Education and Ministry of Women’s Rights, rumours have declared that the programme is teaching ‘gender theory’ in promotion of homosexuality.

Rumours by extremists also say that the programme is aimed at destabilising families to help impose the ‘New World Order’.

Subsequently, conservative Muslims have aligned with fundamentalist Catholic and radical right groups promoting a ‘Day of Withdrawal from School’ where families are keeping their children home on the days when the gender equality programme is being taught.

The union of radical right and Islamist extremist activism has also taken to the streets with an online network called the ‘Day of Wrath’. The group began in November 2013 and has drawn in significant Facebook and Twitter followers promoting days when protestors take to the streets airing their discontents with French society.

While there are various anti-Islam groups incorporated on the Day of Wrath homepage, the most recent protests also saw Islamist supporters joining the ranks on January 26 chanting anti-Semitic slogans alongside their counterparts. Police claimed 13,000 people joined in the protest while activists claim much higher figures.

The UK and France cases expose the malleability and flexibility of radicalised identities. The formulating of friend and foe are cultural constructions that often change alongside the fluctuating social, economic and political issues our societies deem eminent.

As radicalised voices are given platforms to persecute those they deem as the ‘other’, it is important that the moderate, compassionate and rational voices, who make up the vast majority, speak out to counter persecutory narratives, whatever and wherever they may be. I would like to think we judge the enemy of our enemy as an individual, or better yet, rethink who we are quick to judge as an enemy in the first place.

In these antagonistic cycles it is important to consider the value of intervention, whether by organisations like Quilliam or by individual activists, in countering constructed dichotomies of hate. Alliances promoting tolerance and inclusion should be promoted and encouraged to combat hate.

The recently formed working relationship between Tell Mama, countering anti-Muslim hate crimes, and Peter Tatchell, a campaigner best known for his work with LGBT social movements, is one such wonderful example.

5 Responses to “The far-right and radical Islamists are finding common ground in homophobia, anti-Semitism and conspiracy theories”