'Immigrants cost Britain £3,000 a year each', booms today's Daily Telegraph. They are completely and utterly wrong. 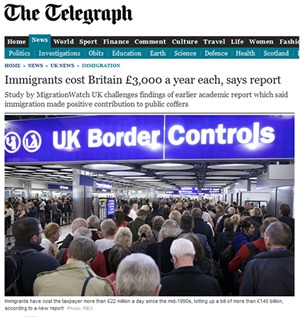 “Immigrants have cost the taxpayer more than £22 million a day since the mid-1990s, totting up a bill of more than £140 billion,” it adds.

The ‘findings’, if you can call them that, are from a report by the anti-immigration lobby group Migration Watch which is out today. The report claims that a paper by the Centre for Research and Analysis of Migration (CReAM), which appeared to show that immigration was a net benefit to the UK, actually shows that immigration has cost the economy hundreds of billions over 20 years.

The Telegraph has predictably regurgitated the Migration Watch press release for a story (I suspect others have too, I just haven’t had a chance to check yet).

The problem is that the Migration Watch report is based on a “stark misapprehension” and is “simply wrong”. Not my words, but those of one of the authors of the original study on which Migration Watch has based its findings.

In a detailed rebuttal of Migration Watch, co-author of the study Professor Christian Dustmann has said that a “serious misinterpretation of the methodology” has led Migration Watch to “invalidate their calculations”.

The mistakes revolve around Migration Watch’s claims that a 2013 paper, ‘The Fiscal Effects of Immigration to the UK’ by Professors Christian Dustmann and Tommaso Frattini, has flaws that invalidate the results – namely that immigrants from the European Economic Area (EEA) who came to the UK after 2000 have contributed substantially more in revenues than they have received in state expenditures.

In response, however, Professor Christian Dustmann has criticised Migration Watch for a “serious misinterpretation of the methodology”:

“The main criticisms by MigrationWatch relate to three points. The first and second points are unfortunately based on a serious misinterpretation of the methodology we have used in our work, which leads to fundamental mistakes that invalidate their calculations. The third point has been already raised by other commentators in the past,” Professor Dustmann has said.

Migration Watch had claimed that Professor Dustmann’s original findings – that EEA immigrants who came to the UK since 2000 have paid in more than they have taken out – are incorrect because they rely on the following three mistaken assumptions, namely that:

(1) [Migrant] employees earn the same as the UK-born population; (2) Self-employed migrants contribute far more than those employed; and (3) Migrants own the same investments, property and other assets as the UK-born and long-term residents from the day they arrive in the UK.

But Professor Dustmann has pointed out that all three of these assertions are wrong:

“Their first claim is simply incorrect. At no point do we make assumption (1). We rather allocate earnings (and the ensuing tax receipts) according to the figures on earnings for immigrants and natives that we obtain from the UK Labour Force Survey (LFS).

“Finally, we have responded to the third point in an earlier reply from November (ignored in the MW report), where we compute an extreme scenario where recent immigrants pay no corporate taxes and business rates whatsoever, and allocate these taxes to long-term residents only. We still find that recent EU immigrant make a positive contribution, while the net contribution of natives remains negative.”

He adds that, as a result of these mistakes, Migration Watch’s conclusion that recent immigrants have cost Britain £3,000 a year each is “simply wrong”.

The Daily Telegraph shouldn’t have published this completely misleading ‘analysis’ without checking it; but more importantly, considering it is so fundamentally wrong, Migration Watch should now withdraw the report.

* As Left Foot Forward has previously reported, migrants who came to the UK after the year 2000 have made a ‘substantial’ contribution to public finances, according to a 2013 study by University College London. And according to the Department for Work and Pensions (DWP), 16.6 per cent of working age UK nationals claimed benefits in 2012 compared to 6.6 per cent of working age non-UK nationals.