This was a Budget that delivered rising living standards to those who are already well off. 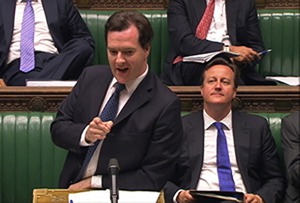 Across the UK real wages have been falling for more than four years, yet despite the unprecedented pressure facing household budgets the chancellor was able to offer little help to those struggling to make ends meet.

His costly increase in the personal allowance (the £500 uplift is set to take £1.8bn out of public spending by 2018/19) will provide £100 a year more to those who qualify. Yet the IFS has repeatedly shown that those who gain the most from such increases are disproportionately already higher up the household income distribution.

With higher earners in the 40 per cent tax band also set to realise the gains from the most recent change, the impacts of this rise are likely to be even more regressive then previously.

In contrast, those on the lowest incomes will see no benefit at all. A quarter of employed women earn below £10,000 and across the economy four million earners are on such low pay – their budgets are as squeezed as they were before today’s announcement.

So it’s no surprise that government’s ongoing mix of tax and benefit changes leaves most low earners worse off overall. The Treasury’s distributional analysis makes clear that whatever the spin, benefit and tax changes mean that those in the lower income deciles will be worse off next year, and when the impacts of public spending cuts are included everyone is a loser.

The chancellor was also keen to talk up his welfare cap which will affect the vast majority of working age benefits and tax credits. In years ahead low income working families, who have already been affected by the majority of recent welfare cuts, are likely to see further deteriorations in the value of benefits as a result of this initiative.

Even within the current context of severe benefit cuts expenditure has often exceeded the 2 per cent ‘forecast margin’ (for example because of policy errors or delays) that ‘capped’ benefits will now be subject to. Had the cap been in place over recent years, working families would likely have seen their tax credit and Child Benefit even more badly squeezed.

Poorer pensioners are also facing a living standards cut – it transpires that around £15bn of their benefits are included in the cap.

While the budget contained many incentives that savers may welcome, how many people can really afford to put £15,000 a year into an ISA?

The chancellor was keen to point out that many ISA savers are basic rate taxpayers, but as the most recent HMRC statistics show the average amount saved in an ISA is under £4,000 a year; and only seven per cent of subscribers save enough to meet the current maximum limit – although this rises to 43 per cent for those with incomes of £150,000 or more.

The Budget also failed young people. Despite youth unemployment remaining far too high there was no new help for those facing long-term youth joblessness, or any attempt to improve existing failing programmes.

Even small measures, such as the TUC’s call for those participating in a Traineeship to be able to receive travel and subsistence expenses before JSA deductions, were ignored.

There was some new support for employer investment in apprenticeships up to postgraduate level, and new money to extend the Apprenticeship Grant for Employers scheme should also pay off in more apprenticeship starts. But overall the 900,000+ young people who are still unemployed find themselves no better off after today’s announcements.

This was a Budget that delivered rising living standards for those who are already well off.

Meanwhile, the OBR’s analysis makes clear that all is not well with the progress of our recovery – in large part because of poor household income growth. Despite all the chancellor’s sweeteners for wealthy savers, the OBR show that the savings ratio is set to fall in the years ahead – a result mainly of ongoing poor growth in real earnings which means household debt will continues to rise.

The OBR warn that:

“Household consumption outpaces disposable income in our forecast, with the saving ratio falling gradually. Meanwhile, residential investment grows strongly, leaving households’ finances in deficit and the gross debt to income ratio rising towards its pre-crisis peak by the forecast horizon. That seems consistent with supportive monetary policy and other interventions (such as Help to Buy), but it may pose risks to the sustainability of the recovery over the medium term.”

The OBR’s analysis also makes the scale of recent real wage falls and future weak real earnings growth clear,  spelling out that it’s not until the end of 2016 that real hourly earnings are expected exceed the level at which they stood in the second quarter of 2008 (and that’s using the lower CPI measure of inflation).

Even if real wages finally turn positive in the months ahead, it will be years before households can recover their past earnings potential.

The chancellor’s severe fiscal retrenchment also continues. Political discussion may have moved away from public service cuts, but budgets remain subject to the toughest squeeze in decades.

Under current plans rates of social security and public spending reductions are set to increase in the years ahead, with government consumption of goods and services (described by the OBR as a rough proxy for day-to-day spending on public services and administration) set to fall back to 16.1 per cent of GDP by 2018/19, the lowest share of national income since 1948.

There were some changes that were welcome.

The chancellor went some way beyond warm words to take action that is intended to deliver a better balanced recovery.

The support he announced for the UK’s energy intensive industries is welcome, providing support that energy intensive manufacturers are in desperate need of, following a sustained campaign from unions and employers for important tax breaks to be made available.

In addition, the annual Investment Allowance for companies is set to double from £250,000 to £500,000 until the end of 2015, which should bring forward some much needed business investment.

And the extensions of Help to Build, although too limited in scale, do look set to deliver some of the new homes that we are in desperate need of.

But overall, this Budget failed against the key test of delivering real improvements in incomes for most people at work.

While the UK’s households continue to face the largest living standards gap in recent memory, all the chancellor had to offer the UK’s middle earners was years more of service cuts and squeezed household budgets.