David Cameron has been criticised by the SNP for delivering a major speech on Scottish independence in London, rather than Scotland. 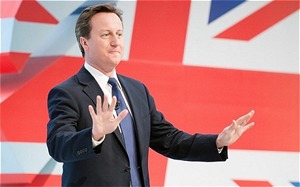 As the prime minister prepares to deliver a high profile speech at the Olympic Park in London pleading with Scotland to stay in the United Kingdom, he has faced stinging criticism from the SNP for failing to make the case in Scotland itself.

Declaring it to be a “cowardly speech”, deputy first minister Nicola Sturgeon has commented:

“This is a cowardly speech from a prime minister who uses the Olympic Park in London to give high-handed lectures against Scotland’s independence but hasn’t got the guts to come to Scotland or anywhere else to make his case in a head-to-head debate.

“David Cameron, as the Tory prime minister, is the very embodiment of the democratic case for a Yes vote for an independent Scotland – and he knows it.”

“Using the Olympic stadium on the day the Winter Olympics begin and seeking to invoke the successes of London 2012 as an argument against Scotland taking its future into its own hands, it betrays the extent of the jitters now running through the No campaign.

“They see the polls closing and they are clearly rattled – but to politicise any sporting occasion is shameful.”

Putting aside the SNP’s refusal to respond to the substance of the speech, Sturgeon’s word’s would probably have more weight if it wasn’t for the fact that the first minister will next month deliver a speech on independence in London himself.

Commenting ahead of the lecture to be delivered on the 4 March and hosted by the New Statesman, Alex Salmond has said:

“Scotland’s referendum is a unique and historic opportunity to deliver a fairer, more socially just and more prosperous society.

“I am looking forward to using this New Statesman lecture to outline how an independent Scotland will be both a progressive beacon and a powerful economic counterweight to the pull of London, which can help rebalance the social and economic structure across these islands which has seen the UK become one of the most unequal societies in the developed world.”