It is time for the Left to acknowledge that there is a conflict between reactionaries and progressives within what is referred to as ‘the Muslim Community’. 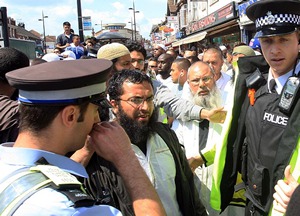 The recent controversy sparked when Liberal Democrat parliamentary candidate Maajid Nawaz commented on the censorship of a satirical cartoon offensive to some Muslims, has highlighted once again that British Muslims are perceived as a homogenous group with no difference of an opinion.

This is a perception widely held on the Left. More often than not, the Left sadly aligns itself with self-serving, self-appointed ‘community leaders’ that it regards as authentic voices, while truly liberal voices like Nawaz’s are shunned as those of ‘Westernised’ sell-outs.

When this happens, religion becomes a tool of politics rather than a matter of private belief and personal conscience.

Religion as a political tool is detrimental both to human rights and civil liberties. It corrodes trust within society and engenders competitive forms of intolerant religious and cultural chauvinism.

The West is, of course, imperfect. But as an immigrant of Muslim background, it strikes me that many British people do not realise how privileged they are to live in a democratic, pluralist society which enshrines equal rights and protections for all its citizens in law. For most of the world’s population, this is a dream.

Witnessing unimaginable brutality driven largely by inter-religious conflict and the genocide of Muslims in the Balkans – correctly described as ‘the worst atrocity on European soil since WW2’ – has shaped my own political views. Religious and sectarian identity politics inevitably lead to hatred, resentment, and – ultimately – violence.

It was the underlying factor in the Srebrenica Genocide in which over 8000 Bosnian Muslims were murdered. It is also the underlining factor in every act of violent Jihadism, including the Woolwich murder, in which Muslims are the perpetrators.

These experiences have taught me to detest religious identity politics and to value secularism, which allows both for freedom of religion and also freedom from religion. Thus, the struggle for secularism is the struggle for equality and human rights, not against them. The values of liberal post-Enlightenment democracy underpin the freedoms and rights of everyone.

For these values to be traduced by members of a minority constitutes a perverse and self-defeating attack on the very source of their own freedoms.

Anti-Muslim bigotry from Far-Right nationalists must be tackled head on. It goes without saying that hate crimes against Muslims are unacceptable and must stop. Any attempt to introduce discriminatory policies such as preventing the building of mosques or stopping ‘Islamic immigration’ must be vehemently opposed.

But the notion that there is rampant persecution of Muslims in Britain – “open season” on UK Muslims comparable to the Nazis’ pre-war persecution of Jews, according to Liberal Democrat peer Meral Hussein-Ece, or a “Muslim civil rights crisis,” as Mohammed Ansar likes to call it – is specious. There are no special ‘Muslim Civil Rights’. There are only Civil Rights.

This imaginary persecution is really a way to disguise a reactionary political agenda. When I was shot at in Bosnia and denied education in Croatia because of my religious identity – that was persecution. Persecution is not when someone is denied special religious privileges with which to protect sexism and homophobia, or to introduce censorship and blasphemy codes or oppress other people.

The fact that the Left often embraces reactionaries and fanatics from within minority religious communities, and sidelines true progressives, speaks volumes. It not only suggests the Left assume all Muslims are illiberal, homophobic, anti-Semitic, misogynist theocrats unable to aspire or live up to ideals of democracy, equality and pluralism. It also suggests that these failures be indulged.

The Left identifies Muslims as a vulnerable minority and, on this basis, actively excuses and covers up for Islamic extremism and other nasty, regressive views that would never be tolerated if espoused by the white nationalist Far-Right. To cope with the undeniable existence of truly liberal Muslims, they are dismissed as an aberration and shunned for fear of alienating the Muslim masses.

This is the soft bigotry of low expectations.

The word Islamophobia is often invoked whenever Muslims, Islam or Islamism are discussed. But by dishonestly conflating criticism of ideas with bigotry, intolerance and the stigmatisation of their adherents, the Left is helping to re-introduce and defend blasphemy taboos by stealth.

This does not help dismiss misconceptions about Muslims – it makes them worse.

This spinelessness and intellectual dishonesty has enabled Far-Right groups such as the EDL to position themselves as the defenders of democracy; those who are unafraid to speak unpleasant and inconvenient ‘truths’ suppressed in the name of political correctness.

The reality is that, in many ways, they are the mirror image of its nemesis and a comparable menace to democracy. Until we recognise that we need to tackle Islamism and religious extremism with the same vigour and same outrage as Far-Right, their appeal will remain.

It is time for the Left to acknowledge that there is a conflict between reactionaries and progressives within what is referred to as ‘the Muslim Community’. In order to defend progressive, egalitarian values in our society, the Left must show solidarity with and support for genuinely liberal and secular Muslims.

It must cease its indulgence of the evasions and double-talk of reactionary traditionalists in the name of self-regarding cross-cultural tolerance.

It is time for people of all religions and none who believe in secularism, democracy and universal human rights to stand together and defend them against their enemies.

But to do so, we must be prepared to discard the labels we often cling to like comfort blankets and to unite around the values we wish to uphold.

19 Responses to “Comment: Opposing religious bigotry is not bigotry”