The newly elected Israeli Labour leader Isaac Herzog sat down to discuss the Britain-Israel relationship with Toby Greene, the deputy editor of Fathom, and Richard Pater, head of BICOM in Israel. 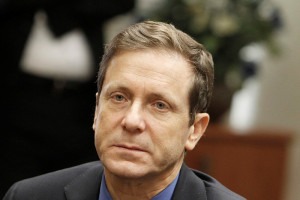 The newly elected Israeli Labour leader Isaac Herzog sat down to discuss the Britain-Israel relationship with Toby Greene, the deputy editor of Fathom, and Richard Pater, head of BICOM in Israel

Toby Greene: Your father served in the British Army. Does that affect the way you look at the UK? How important is Britain for Israel today?

Isaac Herzog: I have a special affinity and respect for Britain and its history, not least its heroic role in the defeat of Nazism in World War Two. I take special pride in the fact that my late father, Chaim Herzog, served as an officer in the worst of battles in the war against the Nazis and was one of the liberators of Holland. Prior to becoming chairman of the Labour Party and Head of the Opposition, I served as the chairman of the UK-Israel Parliamentary friendship group. Lastly, I’ve been watching The Politician’s Husband, which is a British TV series!

TG: You’re more up to date with British TV than we are!

IH: And of course we respect British football. There are a lot of good things that come from Britain. To be more serious, Britain is a very important player in the region and globally, not only because of its historic role, not only because it is part of the P5+1, but due to its leadership role with the United States and other Western powers in dealing with the Iranian nuclear program and promoting peace in the region.

Richard Pater: At the next election you will be a candidate for Prime Minister. How will you convince a sceptical Israeli public that peace is possible and worth the risks?

IH: It is not only that peace is possible, but I need to convince the Israeli public to see me as somebody able to lead in a responsible manner and protect the interests of the nation. I believe that my political record, my record as a minister, as a member of the Security Cabinet and as a member of the Knesset stands for me. I enjoy a certain good will in the public that I need to transform into political support.

I speak in a very frank and open manner. I believe that Israel must move for peace. We must move towards the division of the land between the Palestinians and us in order to maintain the future of Israel as a Jewish democratic state. I say this very bluntly.

For example, on the issue of Jerusalem, I don’t rule out the possibility that as part of a political solution there will be government institutions of the Palestinian state in one of the Arab neighbourhoods of Jerusalem. I don’t think that violates our loyalty, love and affection for Jerusalem. In the eastern Arab neighbourhoods of Jerusalem there reside over 300,000 Palestinians. They are not seen as part of Israel, and rightly so. I think that we need to be innovative and bold and tell the truth to the people. Part of the truth is that in order for Zionism to prevail and to succeed we must make sure that Gush Etzion and Maaleh Adumim will be part of Israel for ever. This needs to be done by way of a swap of land with the Palestinians. If we reach an agreement to separate from the Palestinians, this will be a victory for Zionism.

RP: If I could push you on the Jerusalem issue, what do you see as the solution for the Holy Basin of the Old City?

IH: That needs to be left open. I think the Clinton formula should be a point of reference. However, the Holy Basin is a complicated issue; we are dealing with the most difficult and sensitive beliefs, prayers and wishes of generations. Three things must be clear and unequivocal: the Kotel [the Western or ‘Wailing’ Wall] must stay in Israeli sovereignty under any circumstances, no right of return for the Palestinians to Israel in any way, and Israeli security needs must be met.

RP: As leader of the opposition you now meet regularly with the Prime Minister Netanyahu. How do you assess his seriousness in the current peace process?

IH: Well, I’m following it closely. Like many in Israel, we in the Labour Party have questions. I believe the Prime Minister understands the necessity and urgency of moving towards peace, but I’m not sure he has the guts to do it. I hope that he and Abbas meet, look each other in the eye and don’t blink. They have a golden, historic opportunity of moving towards peace. John Kerry is making a major effort in moving the sides towards a joint formula in the framework agreement; they need to accept it. They also need to speak to their people, speak in each others parliament and speak frankly. I think there is a moment here where most of the desires of both sides  can be met, in spite of all the disappointments and pain that this entails.

RP: As leader of the opposition you are the leader of a disparate group of parties including not only Labour but the ultra-Orthodox parties and the Israeli Arab parties. How can you be a viable opposition?

IH: The opposition has a large common denominator ‒ social issues are the top priority of all our parties. Dealing with the social gaps, privatisation and social justice are major elements in Labour’s agenda, especially emanating from the massive social protests of 2011. I want to bring the whole opposition to support the peace process as well. The only dissenting voice in the opposition is from the ultra-Orthodox, but if you listen to them carefully, for quite a while, they’ve been much more accommodating about the process with the Palestinians. Of course, there are thorny issues amongst us ‒ civil rights, religious issues and others. There are conflicting views in this realm in the opposition, but that’s only natural.

TG: Let’s talk about the challenge of integrating the two marginalised sectors in Israeli society ‒ ultra-Orthodox Jews and Israel’s Arab citizens. This is one of the big social challenges facing Israel. How do you think it should be addressed?

IH: Israel is a multi-cultural society. My policy is based on four legs: a Zionist approach to preserving the Zionist legacy and the Zionist spirit in our nation, promoting democracy and liberalism, advocating social justice in all forms, and recognising the multi-cultural change that has taken place in Israel. We must attend to all those groups. In my speech at the party conference I said we’re fed up of one group fighting the other; we all chose to live here and we must all maintain the unique fabric of our society, which is a mosaic.

I have been heavily involved in dealing with both the Haredi (ultra-Orthodox) and the Arabs, and in both groups there are major social changes taking place; more social mobility, more empowerment of women, more inclusion in the workforce, more learning. But it’s an uphill battle.

There is a process of inclusion and ‘Israelisation’ of the Arabs in Israel. With all the problems that are still there, it is an impressive process. My intention is to hug all those groups with affection, with warmth, with a welcoming spirit that will include them and strengthen them, and mould society into a more prosperous, successful and equal place.

TG: This week we have seen demonstrations for African migrants. How would your policy differ from the current government’s approach?

IH: That is a very complicated issue. There is no clear answer. I believe that Israel must negotiate with Eritrea. There are tens of thousands of Eritreans here, and Eritrea has diplomatic relations with Israel, so we must commence a process with the Eritrean leadership to ensure that whoever returns to Eritrea does so safely. In the mean time we must make sure that those who cannot go back to their country should have a basic ability to earn for a provisional period. It’s complicated because one doesn’t want to create a precedent which could affect the equilibrium of the nation. There are millions out there who may want to come to Israel.

This complex situation is the subject of a major public debate in Israel today and we are crafting our message on it. It’s a question that many social democratic parties confront. On the one hand social democratic parties are more liberal towards immigrants, and on the other hand there are social issues that lead to a certain objection to an influx of migrants; certainly in a state like Israel.

TG: Another thorny issue which has got a lot of international attention is the legislation that was proceeding through the Knesset to address the long-standing land claims of the Bedouin in the Negev. Where do you stand on the government’s attempts to resolve
this question?

IH: I think that there is a false campaign of diatribe and baseless claims against Israel and the way it is dealing with the Negev Bedouin. The Labour party had reservations about the Bedouin legislation because we thought that it needed to be dealt with differently; namely the manner of the review of the land claims needed to be done through a different process. The government chose to try to introduce legislation to ensure a good quality of life for the Bedouin, while ‒ parallel to that ‒ also resolving the land claims. It has turned into a political battle.

Yesterday, we met with the government agency that deals with this issue and we heard their side of the story. They say that many Bedouins are eager to resolve the issue because in Bedouin society there are a large number of polygamous families that have no income. There is a lot of poverty, which I can confirm as a former Minister of Welfare. There is no adequate infrastructure because of the unresolved land claims, which does not allow correct zoning and planning until you have determined who the owner of the land is. The government are trying to find a way. It has allotted a substantial amount of money towards this project.  I hope that there will be a formula devised that will enable swifter negotiations between the government and those who claim ownership of the land. Separate from the land issue, Labour demands a much larger investment by the government in infrastructure for Bedouin society.

This interview appears in the new issue of Fathom. Read Dave Rich on the Quenelle, Safa Abu-Rabia on Bedouin politics, Aluf Benn on Netanyahu, David Landau on Sharon, David Hirsh on Anti-Zonism and more