The decision to close Sulivan does everything that Tories say they oppose when it comes to education. 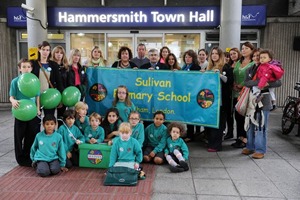 Last night, the Tory Council in the London Borough of Hammersmith and Fulham took one of the most unfair and destructive decisions a council can make: it ordered the closure of a top-performing, inclusive, popular state school which serves some of the most disadvantaged children in the borough.

Why? So that a Church of England secondary free school for boys can take its land.

The primary school in question is Sulivan Primary, a local authority school which this year ranked 233rd out of 15,000 primaries in England and Wales in terms of pupil progress, the main measure of school performance.

In the most recent SAT exams Sulivan’s pupils, a large proportion of whom come from deprived backgrounds, performed well above the national average, with 83 per cent achieving the benchmark of level 4 or above in reading, writing and maths compared with 75 per cent nationally.

This phenomenal success earned the school a letter of congratulations from schools minister David Laws just last month, praising the “excellent performance” of pupils, “particularly…disadvantaged pupils”. Earlier in 2013 Sulivan was also awarded membership of the Mayor of London’s Gold Club, “an annual scheme which celebrates and shares exceptional practice in London’s primary and secondary schools”.

When news broke last year that the school might close, I wrote a piece which gives the full background to the story. In summary, Hammersmith and Fulham Council have always denied that they are closing Sulivan to give the land to Fulham Boys School, the free school which currently lacks a permanent site.

They say that they made the proposal because Sulivan and a neighbouring primary, New Kings (a good but unexceptional school), are under-subscribed and therefore not ‘schools of choice.’

This, they claim, is the reason for the proposed ‘amalgamation’ of the two schools which would reduce their combined intake by 20 per cent. The fact that Sulivan pupils would be transferred to New Kings thus ‘freeing up’ Sulivan’s land for the free school was merely an ‘added benefit’ of the proposal; the Council has repeatedly insisted that this was not a factor in the decision.

The problem for the Tory Council is that the only justification they give for closing Sulivan is factually incorrect. Sulivan is oversubscribed at nursery and reception stage, with the longest waiting list in the borough for nursery places; it has very much become a ‘school of choice’. The consultation form and the information on the Council’s websites use outdated roll figures, showing every year to be under-subscribed.

Despite knowing about this error since July 2013, it was never corrected. It is very likely that Sulivan would soon have been full, if not over-subscribed, in every year group. By contrast, the free school programme has been dogged by large numbers of unfilled places.

Given that the borough already has enough secondary school places (but not primary), this problem seems likely to continue.

Closure of Sulivan and amalgamation on New King’s site will mean that Sulivan’s outstanding head teacher, Ms Aldridge, will lose her job, while the current New Kings’ head will lead the enlarged school. How painfully ironic, then, that David Laws, in his congratulatory letter to Ms Aldridge, wrote:

“We…need excellent school leaders, who have improved outcomes for their disadvantaged pupils in particular, to support other schools. You may of course already be doing this…”

If concern over unfilled places was really the only reason for this amalgamation proposal, you would think that Hammersmith and Fulham Council would at the very least have considered expanding Sulivan to accommodate New Kings’ pupils under the exceptional leadership of Ms Aldridge. But no.

The reason, of course, is that this whole exercise is being carried out to make room for the secondary free school and the Council has been extremely poor at disguising their true motivation.

Last year Sulivan wrote to the Council, putting forward the possibility of amalgamation on their site, not New Kings. In its reply, the Council said that Alex Wade, founder of the Fulham Boys School

“did not see your [Sulivan’s] alternative plan as workable, and that the clear preference of the Fulham Boys School’s governors and head teacher would be for a new secondary on the larger and more suitable Sulivan site”.

Further, if the proposal was only about amalgamation, the Council shouldn’t have counted consultation responses which supported the proposal solely because it would free up the site for Fulham Boys.

Not only did the Council include 970 of these responses, it disregarded two ringbinders full of letters and petitions opposing the proposal, together with local schools’ petitions and the wider ranging 38 degrees petition, both of which had thousands of signatures.

The reason? They were not submitted “online or on the blue pro-forma”. Nowhere did the consultation say that responses would only be considered if they were submitted in a prescribed form.

Even after rigging the consultation results, there were still far more responses opposed to the proposal. So the Council decided to exclude responses from residents, staff and others, focussing solely on parents. This meant that marginally more respondents in this rigged count were in favour of the proposal.

However, as Sulivan’s excellent submission shows, when you discount those responses unlawfully included, a large majority of parents oppose the plans. And this is not even counting the contents of the ringbinders.

This sorry saga gets worse when you consider the broken promises and hypocrisy of the Conservatives, and the role Michael Gove played in facilitating the closure of Sulivan.

One of the Tories’ main manifesto promises, which remains unimplemented and has been largely forgotten, was to “give parents the power to save local schools threatened by closure, allowing communities the chance to take over and run good small schools”.

The decision to close Sulivan does everything that Tories say they oppose when it comes to education – local government stifling innovation and excellence (or actively killing it in this case), meddling in local affairs and ignoring the wishes of parents and local residents.

And there’s a final bitter and ironic twist to this tale.

To avoid the ‘dead hand of local government’, Sulivan applied for academy status when it first learnt that it was under threat of closure. Once an academy, the Council couldn’t have touched the school.

Michael Gove has the final say over whether schools are allowed to convert to academy status. Sulivan met all the criteria for conversion, but according to a response I received from a DfE official:

“The Department considered the academy application and decided to defer considering whether to issue an Academy Order until a decision on the amalgamation has been taken.”

In other words, there was nothing in law to prevent Gove from granting the order which would have saved Sulivan, but he chose to allow local government to close one of the best schools in the country.

Can you imagine what he would have done, and said, if Hammersmith and Fulham were a Labour Council?

Never again can Gove say that he champions excellence in the face of destructive local government.

This might not be the end for Sulivan. It seems likely that the consultation process was legally flawed, which would open it up to judicial review. Watch this space.

Shadow minister for justice Andy Slaughter MP (Hammersmith) has now responded to the story. Speaking to LFF, he said:

“The local community are genuinely confused why Hammersmith & Fulham Council want to destroy a brilliant school. It was clear, that despite overwhelming opposition from parents and the Save Our Sulivan campaign, the Council were going to plough through with these reckless plans. The government say that Sulivan is in the top 250 primaries in England and recently the school achieved one of Boris Johnson Gold Award’s for high-quality schools. Its closure is about politics, not community. Sadly this is just the latest act of community vandalism by this council. Voters have the chance to boot them out in May. I sincerely hope they use it.”