The struggle for justice for the Palestinians is an urgent and necessary one, but is utterly discredited by allying ourselves with reactionaries. 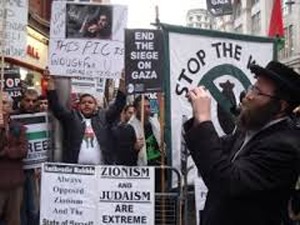 When Jobbik leader Gábor Vona visited London last weekend, I was one of over a hundred people to assemble at Holborn station to give him a piece of my mind.

Though Gabor himself had been swiftly whisked away to safety, around 50 supporters of the Hungarian fascist party found themselves stranded inside the tube station’s ticket hall, a thick line of police protecting them from the angry anti-fascists outside.

After a couple of hours or so, the police marched the increasingly dejected Jobbik men back down onto the platforms, from where they were subsequently escorted to a re-located rally in Hyde Park.

Though the fascists eventually got to have their meeting in peace, the anti-fascist mobilisation was one of the more encouraging ones I’d experienced. Jobbik had had their day badly disrupted and their activists badly humiliated – standing in sulky, impotent silence while a large crowd of lefties chanted ‘Auschwitz, Sobibor, never again!’ at them. Hearteningly, many Hungarians, as well as some British Jews from decimated Hungarian families, had bolstered the crowd.

So it was in good spirits that I left the demonstration to make my way home. As I crossed the road, I noticed a small group of Haredi Jews in the uniform of side-locks, fur hats and frock coats that distinguish the ulta-orthodox. They stood in a line behind a banner – ‘Authentic Judaism Opposes Zionist Aggression’ while people from the periphery of the Jobbik protest took pictures and smiled with approval.

I recognised them as members of Neturei Karta – a small, bizarre Haredi sect that has made a name for itself through it’s militantly anti-Zionist stance, it’s refusal to recognise the Israeli state and it’s willingness to line up for photo opportunities with the likes of George Galloway, Mahmoud Ahmadinejad and Hamas.

If you’ve ever been on a demonstration in support of the Palestinians, or if you have a sizeable number of lefties among you’re Facebook friends, you’ll probably have seen pictures of them, the juxtaposition of religious Jewish garb and Palestinian flags making for quick-and-easy symbolism. “Look at this”, the Facebooker will often say, “even these super-religious Jews think Israel has gone too far this time”.

But Neturei Karta’s opposition to Israel has nothing to do with left-wing values, internationalism or a humane critique of state aggression, nor does its support for the Palestinians stem from humanitarian concerns for an occupied people.

Instead, it opposes the Israeli state on purely theological and reactionary grounds. According to them, only the returned Messiah can rebuild scattered Israel, and when he does, he will do so not as a relatively secular parliamentary democracy, but as a godly kingdom. For Neturei Karta, the current Israel is an atheistical abomination, poisoned by modernism and godlessness.

In other words, they oppose Israel not from the secular left but from the theocratic far-right.

But what they were doing here, at a protest against Hungarian neo-Nazis, not Israel? When I asked they explained that “the Zionist movement slanders many of its critics as anti-semites”. Slow on the uptake, I still didn’t understand.

And then it clicked 0 they were here for the Jobbik protest after all, but not against but in favour of them. Hungarian Nazis hate Israel, therefore Neturei Karta like Jobbik. And all around them, incomprehending lefties were taking their picture and wishing them well.

Of course, Neturei Karta are a small and largely inconsequential sect. I’m also sure many of the protesters cheering them on did so out of well-meaning ignorance rather than anything sinister.

Nevertheless, George Galloway, the Palestinian Solidarity Campaign and others prominent on the left have shared platforms and taken photo opportunities with this noxious cult, just as the Socialist Workers Party were once willing to promote the Holocaust-denying jazz saxophonist Gilad Atzmon for his ‘anti-Zionist’ credentials.

Next time they try it, they should be reminded of last weekend.

The lesson for the left is obvious. The struggle against Israeli militarism and for justice for the Palestinians is an urgent and necessary one, but it is discredited by allying ourselves with religious crackpots, anti-semites and reactionaries.