52 per cent of the people in the areas where Benefits Street was filmed are in employment. 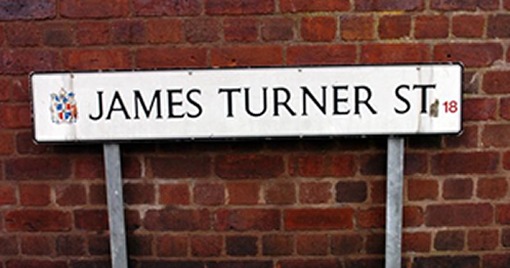 There are two pervasive myths about welfare in the UK which are routinely retailed by politicians and the media.

By ‘myths’ I don’t just mean widely believed falsehoods, but statements which embody a mythological mode of thinking which has no relation to facts whatsoever.

The point about these myths is that they refer to things taking place elsewhere involving other people. It is the sense of otherness they convey rather than the factual inaccuracies they involve, which tells us we’re dealing with myths.

So to James Turner Street, the supposed subject of  Channel 4’s documentary series Benefits Street, which seems to have given the struggling Iain Duncan Smith a new lease of political life. Press coverage of the series has repeatedly claimed that the great majority of residents on the street are receiving out of work benefits.

The Express: Benefits Street exposed: The street where 9 out of 10 households are on welfare

The Sun: Channel 4 documentary Benefits Street is about life in James Turner Street, in the Winson Green area of Birmingham, where 90 per cent of the residents are on handouts

The Mail, (this Tuesday): The series … follows the lives of people on James Turner Street – where 90 per cent of residents are on benefits

Today the Mail has toned down its claim: it seems only 75 per cent ‘are said to be on benefits’, which may indicate a tentative recognition on the Mail’s part that its previous claims don’t stand up to scrutiny.

What are the real employment figures for ‘Benefits Street’?

I’ve matched the postcodes for James Turner Street to Census Output Areas, the finest grained geography at which official statistics are normally published, using ONS’s postcode/output area lookup file. These are very small areas indeed, with about 175  households in total. James Turner Street straddles two of these areas. Data on employment and economic activity is available from the 2011 Census via Nomis.

If we want to know what employment looks like on James Turner Street, this is where to start.

In these output areas, 43 per cent and 38 per cent of people aged 16-74 were in employment on Census day 2011. However this includes pensioners and students in the denominator. Focussing just on the non-retired, non-student population, 52 per cent in both areas were in employment. About a third were ‘other inactive’, meaning they were neither working nor seeking work, and 16/15 per cent were unemployed.

If the production company for Benefits Street managed to find an area within these output areas where 90 per cent or 75 per cent of adults were out of work, they would have to have been very selective indeed.

It’s also useful to look at the household level, as many non-working people are living in households where someone else is working, and most benefits are awarded on the basis of household income. Focussing on non-retired and non-student households, 62 per cent and 65 per cent of households had someone in employment.

These figures should not come as a surprise. The areas where ‘nobody works around here’, like the ‘families where nobody’s worked for generations’ belong to mythological thinking.

Moving up a geographical notch to the level of Census Super Output Areas (average 670 households), in only 0.16 per cent of areas are 50 per cent or more of working age non-student households without employment. The great majority of people who are out of work live in areas where the majority of people (other than pensioners or students) are in work. This is true even in very deprived areas, of which James Turner Street is an example.

There is more information on the James Turner Street area available at ONS’s Neighbourhood Statistics site (using the larger Super Output Area geography). This shows that out of work benefit receipt among people of working age is 30 per cent rather than the 90 per cent of myth.

On a range of deprivation indicators, this area is clearly struggling. But among the wealth of largely depressing statistics on the site is a detail we haven’t heard about in the frenzy of hand-wringing about Benefits Street. Educational achievement at GCSE level is well above the average for both England and Birmingham with 71 per cent achieving 5 or more A*- C passes compared to a national average of 59 per cent.

Perhaps that detail might encourage people to junk the mythological thinking surrounding  this unfairly maligned area. When it comes to GCSE attainment, the James Turner Street area seems to be bucking the expectations of the media, the government and the general public. That should be something to celebrate. 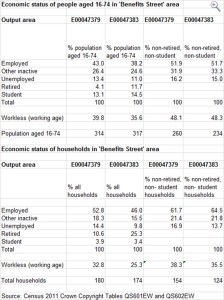