It’s time for the global community of democrats - whether on the left or the right - to stand shoulder to shoulder with those battling extremism in Thailand. 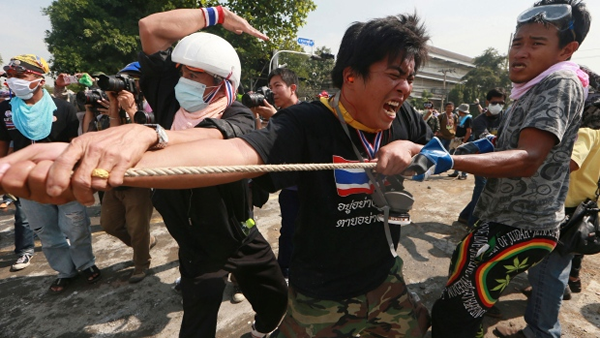 Mention Thailand and most people will think of beaches, backpackers, Buddhism and its famous tourism industry. But you can bet as British tourists pack their sun-cream and beach-towels for a Winter holiday they won’t be thinking of one particular ‘F’ word – fascism.

Yet, last week, amidst the worst violence Thailand has witnessed in several years, the word ‘fascism‘ was uttered by a leading group of progressive Thai thinkers and academics.

In the shadow of protests led by Suthep Thuagsuban, a former ‘Democrat’ party deputy prime minister who is tainted not only with highly credible claims of corruption dating back to the 1990s, but who is also awaiting to be indicted for the murder of pro-democracy protesters in 2010, these thinkers/academics had come together to form the Alliance For the Defence of Democracy (AFDD).

Suthep, who resigned from the Democrat Party only last month, is still closely allied to his former boss and former PM, the present Democrat Party leader, Abhisit Vejjajiva (Abhisit, who is also a British citizen and Old Etonian, is a close friend of London Mayor, Boris Johnson), who was himself indicted for the 2010 murders only last week.

It is quite easy to see how the AFDD came to use the ‘F’ word. Suthep’s People’s Democratic Reform Committee (PDRC) protest movement is made up of senior Democrat Party figures, Thai aristocrats, the super-rich and Bangkok’s middle classes all of whom are desperate to cling onto the status and power they’ve enjoyed for so long.

The PDRC’s avowed programme has morphed from preventing a controversial amnesty bill – the bill was dropped in mid-November – through to its present aim of ‘stopping’ the February 2014 general election called by the 2011 general election-landslide-winning Thai PM, Yingluck Shinawtra.

Instead the PDRC is seeking to impose a ‘People’s Council‘ – a wholly appointed body drawn from Thailand’s elite – on the country in order to enact what the PDRC calls ‘reforms’. These reforms include, among various vague proposals to ‘stop corruption’, forbidding what the PDRC calls Yingluck’s ‘populist policies’ or, more accurately, what The Economist calls good old-fashioned Keynesian economics‘.

In an article in the Bangkok Post entitled ‘Academics brand people’s council ‘fascism‘, the AFDD were damning in their analysis of the PDRC. The Post quoted Piyabut Saengkanokkul, an AFDD member, who said that

“The idea of setting up a people’s council comprising members of various professions was an idea inherited from fascist corporatism, as seen in Italy during the period of Benito Mussolini’s fascist dictatorship.”

You don’t have to delve too deep to see who is backing the PDRC’s “fascism”. In fact, many Thai aristocrats and super-wealthy openly boast of their disdain for democracy, accompanying this derision with sneering contempt for ordinary Thai voters.

A recent Reuters article examined the Thai aristos and billionaires who have taken a full and active part in the PDRC protests. Reuters’ damning expose partly focuses on one Chitpas Bhirombhakdi an “heiress to a $2.6 billion family fortune” and a Democrat Party spokesperson who has been in the forefront of the protests. Recently Chitpas was quoted in another newspaper stating that ordinary and poor Thais don’t have a “true understanding of democracy…especially in the rural areas”.

Of course Chitpas’ Democrat Party – the absolute bastion of the Thai establishment – have never won a parliamentary majority with their last semblance of success coming over twenty years ago when they managed to become the largest party in the Thai parliament with 21 per cent of the vote.

Since then Abhisit seized power in what was widely termed a ‘judicial coup‘ in 2008 – an act which later led to huge pro-democracy protests in 2010 and the brutal slaughter of almost 100 Thai civilians of whose murder he know stands charged – which was followed by PM Yingluck’s huge landslide election victory in 2011.

And now, unable to win an election, this once seemingly ‘liberal’ party – it’s simply shameful that the UK Liberal Democrats are allied and connected directly to the Thai Democrat Party via the Liberal International – have now veered towards political extremism.

So what next? Suthep has now taken to threatening PM Yingluck’s 11year old son from the protest stage whilst his acolytes have said they will lead a mob to ‘storm’ the US Embassy. The PDRC, who have vowed to stop the February 2014 general election, still rely on the support of Abhisit’s Democrats who look increasingly likely to boycott the elections. And, waiting in the wings, is the notoriously coup-happy Thai Army.

The experienced and widely-published Bangkok-based German photojournalist, Nick Nostitz, who has been covering Thailand’s political upheavals for the last decade – he was recently singled out for physical attack by the PDRC and then later produced an exceptional report on PDRC attacks on a pro-democracy Red Shirt rally – told me this about possible future Thai Army involvement.

“After the PDRC met the top brass on Saturday, it looks that presently the military still refuses to intervene any further than offering itself as a facilitator for possible negotiations. However, the Thai military is notoriously secretive in their decision making processes, next week the configuration could completely change again.”

Thailand stands at crossroads – the potential for civil war is now obvious and fascism is rearing its ugly head. It’s time for the global community of democrats – whether on the left or the right – to stand shoulder to shoulder with those battling extremism in Thailand.