The expansion in student numbers may in the end result in less generous terms for future graduates. 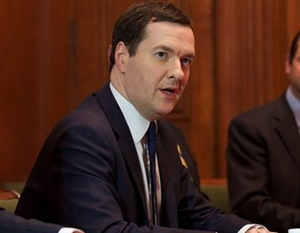 In yesterday’s autumn statement, the government announced that it would remove the cap on student numbers in higher education. It estimated that an additional 60,000 students could access higher education as a result.

This is a very significant move that could have a large benefit for society and the economy. This expansion of educational opportunity should help to boost social mobility and economic growth.

However this announcement has immediately raised questions over whether the government can afford this policy and what impact it will have on future spending in the Department for Business Innovation and Skills (BIS). There is considerable confusion among commentators over exactly how the government is paying for the expansion. This note aims to shed light on some of these questions.

Big questions for spending in the next parliament

When the government funds students to go to university there are three costs to consider:

Let us take each of these in turn.

The government expects that an additional 60,000 students will enter higher education as a result of these changes. This means that it will have to finance an additional 60,000 student loans. The government has decided that it does not want to borrow more in order to finance these loans, because this would increase public sector net debt. It has therefore decided to finance the loans by selling off some assets (in this case a previous tranche of the student loan book).

This can be seen in the table below (click to zoom). Line i shows the additional outlay the Treasury expects to make on student loans between 2015/16 and 2018/19 as a result of removing the numbers cap. Line ii shows that it will more than cover this from the sale of the loan book, which will be sold off in stages over a five year period. 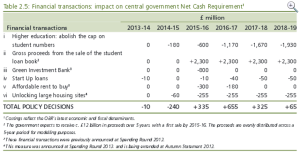 However there are two big questions about this move. First, how will the government finance the additional loans it will have to make after the end of that five year period? Assuming that it wants to maintain higher student numbers in the future, it will need to keep issuing more loans. Is the government prepared to add these loans to public sector net debt after 2020?

Second, is it sensible to finance five years worth of additional student loans by selling off an asset that could be much more valuable to the state over the long term?

The government will almost certainly have to sell the loan book off for less than it is worth (see this article by Martin Wolf for an explanation of why this is the case). This means the government are funding a short term spending commitment by selling off a long term asset for less than it is worth. A number of economists have argued that it would represent a better investment if the government simply used its cheap cost of borrowing to finance more loans in the usual way, rather than doing it by selling off assets.

Spending on teaching and maintenance

The second part of the equation is any additional spending the government has to make on teaching grants and maintenance grants as a result of increasing student numbers. Unlike student loans, these are upfront elements of government expenditure that appear on BIS’s Department Expenditure Limits (DEL) and therefore affect public sector net borrowing.

The table below (again, click to zoom) shows that the Treasury has decided to fund these costs for 2014/15 and 2015/16 by increasing BIS’s departmental expenditure. Line 9 shows that 410m has been set aside to cover these upfront costs to BIS. 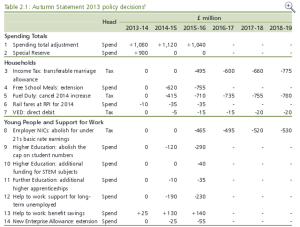 This move also raises a big question. The government has only budgeted this additional spending until 2015/16. This is usual practice in a spending review, as departments do not negotiate their budgets for the longer term. However removing the student numbers cap means that this is a long term spending commitment. The autumn statement estimates that from 2018/19 whichever government is in power will have to find an additional £720m per annum to cover the cost of higher student numbers.

How will BIS find this money in the future? Will the Treasury continue to provide additional resources by increasing the BIS budget, or will BIS have to reduce spending in other areas (such as further education or science) in order to afford it?

This in turn raises important questions for the general election, as each political party will have to answer whether it is prepared to continue this spending commitment in the next parliament – and whether it will sacrifice spending in other areas as a result.

If the government issues more loans then the absolute size of this subsidy will also increase. Due to the way this provision is accounted for by the Treasury, it does not count towards public sector net borrowing and is therefore not listed in table 2.1 above, but it is effectively a spending commitment – albeit one that hits the national accounts in the longer term.

The Treasury has committed to covering the higher cost of loan subsidies in 2014/15 and 2015/16, so there will be no immediate impact on BIS’s DEL in the short term.

A larger concern is whether the government have estimated the value of loans that will go unpaid correctly. They do not have a good track record at this – previous estimates have proved to be overly optimistic which has left future governments to make up the shortfall. Modelling by London Economics and IPPR suggests that the same may be true this time. They estimate that the total value of loans that will not be repaid is nearer 40 per cent, which is higher than the 35 per cent currently predicted by BIS.

What’s more, this figure may rise as the additional 60,000 students who enter the system are likely to have lower A-level grades and there is no guarantee that their future earnings will be as high as the current cohort.

If the cost of the loan subsidy does rise to unexpectedly high levels a future government would have two options for controlling expenditure. First, it may decide to re-introduce a cap on numbers in order to bring the cost of loans down again. Second, it may decide to change the terms of student loans so that a larger proportion of loans are repaid.

This would essentially shift the cost of expanding student numbers onto graduates. London Economics and IPPR have modelled the effect of a number of possible changes to the loan system which are available in detail here. This point has so far been missed from the reaction to George Osborne’s announcement: the expansion in student numbers may in the end result in less generous terms for future graduates.

The previous sections explained that removing the cap on student numbers implies a long-term spending commitment in three areas (loan outlay, grant funding and loan subsidy). The exact size of these costs will inevitably depend on the number of additional students that come into the system.

The government also hoped that increased competition will help to drive up standards.

One particular cause for concern is that the autumn statement suggested that scrapping the cap on student numbers will apply to private providers. There are serious concerns about whether private providers can be relied on to recruit students in a responsible way, and whether competition will be sufficient to ensure they offer quality provision.

Evidence from the US suggests that allowing private providers unlimited access to students funded through loans has a number of perverse effects, including higher education institutions acting like ‘rentiers’ – by recruiting large numbers of students, delivering poor quality education and pocketing the profit. Will there be sufficient quality controls to prevent this happening in the UK?[1]

And what about the other cuts?

Unsurprisingly, yesterday’s news focused on the headline announcement of removing the cap on student numbers. This note has explained that these announcements imply an increase in public expenditure (and net debt) in the next parliament.

This itself may not be a bad thing if it leads to greater social mobility and higher growth. Indeed the government argues that the policy should pay for itself in the long term if it leads to higher productivity via a better skilled workforce.

However, it is important to see this in the context of other decisions about spending cuts and commitments.

In the short term, the Treasury has committed to increasing BIS’s DEL in order to cover the cost of expansion over the next two years. However the autumn statement also confirmed a series of spending cuts for BIS, which means that the department will have to save £2.7bn in the first three years of the next parliament in addition to those cuts in the remainder of this parliament.

The Treasury headlines focused on the additional spending for increased student numbers – but it is clear that there is more pain to come in the next few years.

These cuts will be difficult for BIS to deliver because a large part of its spending on higher education is tied up ‘off balance sheet’ in the form of student loans, and cannot therefore be used to make any immediate spending cuts. As a result, other parts of its budget are left very vulnerable including:

BIS will have to make some very difficult decisions about funding in these areas in the next four years. And the future spending commitments implied by the increase in student numbers mean these areas could come under more pressure in the future – if the Treasury does not commit to additional funding over the long term.

The government’s ambition to increase student numbers is a good one which should bring about important social and economic benefits – but we should not underestimate the significance of this move for higher education funding and for public spending commitments and choices in the next parliament.

[1] There are other institution-level risks. For example, could an unpopular institution compensate for a lack of UK demand through EU recruitment which would have significant cost implications?

4 Responses to “Removing the cap on student numbers: is it affordable?”