Carl Packman reviews the Ringtone and the Drum by Mark Weston. 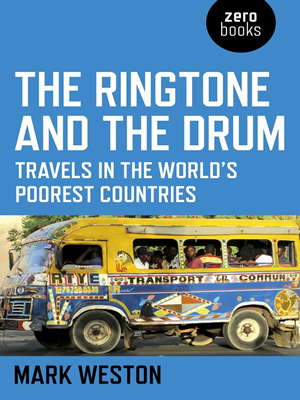 Carl Packman reviews the Ringtone and the Drum by Mark Weston

No doubt every western individual privileged enough to travel abroad to countries poorer than their own has had the feeling that they are doing something slightly murky; that they are perhaps on occasions indulging in poverty tourism.

Already this is evocative; after all, foreign travel is assumed to be the pastime of the richest in society (though my own experience was anything but, still paying for it some years after it happened).

Regardless, there is a politics and ethics to travel which, once sought out, doesn’t have to leave the traveller feeling pangs of constant guilt.

One website, for example, that I perused before going on a recent trip to Cuba was called ‘The Time Crunched Traveller’, which advises the following to clear one’s self of travellers’ guilt: ensure money spent at the place of destination is helping the community; ensure your motivations are to understand a place better, not to trivialise people’s living situations; only experience in other countries that which you’d be open to experiencing in your own; explore alternative ways to understand extreme poverty; and be prepared to respond to what you have seen.

Mark Weston, in his book The Rington and the Drum: Travels in the World’s Poorest Countries, certainly ticks most of these boxes. But he goes further still: he has documented his travels in a book that without doubt has the potential to be a guide to a better understanding of forgotten parts of the world.

The book I would suggest is not merely a travel book, but a book of political travel. The places Weston visits, namely Sierra Leone, Guinea-Bissau and Burkina Faso, are three of the world’s poorest countries, all in West Africa, but are constantly changing in incredibly fascinating ways.

What’s strange is that the problems that face these countries, as described by Weston and in general, are sometimes very familiar. Elections being postponed, China offering up financial deals, external boosts for a nation’s private sector. This could be anywhere.

When one man who Weston speaks to becomes infuriated about the bleak future of Sierra Leone he says: “There is no society”.

What there is, however, is a story. Weston deals with the experience of being a white face in a poor Black nation (“The expectation that Westerners will solve your financial problems can partly be explained by the belief that the white man…owes a debt to the black” and “when a late night taxi drove us home…I remember thinking how much more lucrative it would be for the driver if he were to hand us over to kidnappers than drop us at our hotel”), but he rightly resists the temptation of introspection – especially given the richness of the world around him and stories they tell of the whole world.

Weston re-tells the story of Thomas Sankara the charismatic Marxist former leader of Burkina Faso, commonly referred to as the African Che Guevara. Doubtless he would have described the World Bank as moneylenders, neo-colonialists on the “reconquest”, according to Weston; but after two decades of corruption the country begs for money from them, the IMF and former colony France.

On December 5, the World Bank’s Board of Executive Directors approved US$100 million from the International Development Association (IDA) to support Burkina Faso’s efforts to bring to fruit private sector growth and job creation. The One Africa of Sankara’s dreams has been replaced for the globalisation of private capital.

Like almost everywhere else the Chinese are also swooping into Africa – making France very nervous by all accounts (China is now Africa’s largest trading partner). Government scholarships here, hospitals there, an opera house in Algeria; China is delivering soft power for cash – some 1,700 projects since 2000.

These parts of Africa are home to this, World Bank money, religious tension, and the constant threat of famine – these tribulations alone, and Weston’s experiences of this on the ground, are what makes his book so gripping.

As he points out, one Paul Collier, an economist at Oxford University, calculated that half of countries that endure civil war slip back into it within a decade of peace breaking out. This makes the prospects of these countries extremely turbulent.

Sierra Leone’s Special Court, which got its biggest hit with the trial and conviction of Charles Taylor, closes down this year, which marks a successful end, now replaced by a residual court overseeing the protection of witnesses. However in Guinea-Bissau, the transitional government has delayed elections which were meant to draw a line under a 2012 military coup.

To be sure this world is in flux, and even where there is relative stability the chances of a rocky future remain high and unexpected. A glance at the travel warnings for UK tourists in Burkina Faso and Guinea-Bissau tell us all we need to know: “underlying threats from terrorism”.

What this book does best is demonstrate, through real stories and genuine reportage, the ongoing change in power dynamic between Africa and the various countries who take an active interest (usually with their wallets) in it. Weston deals with extremely difficult issues such as being white and middle class in a third world country, but also gives us insight into forgotten or relatively untapped worlds.

Most peculiarly, though, for the reader who expects to read about Africa and Africans and see a mystical, perhaps even alien, people, we instead find that their attitudes, their dreams, and their hopes are essentially human and just like everybody else’s.