The voters the Conservatives need to win over to improve on their 2010 election showing are far more supportive of the transition to a low-carbon economy David Cameron realises. 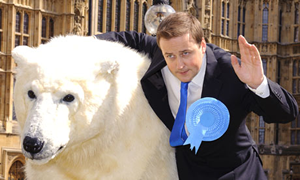 David Cameron – the conservative politician who once went to hug a huskie to prove he cares about the environment – has now dismissed it all as ‘green crap’.

The furore about Cameron’s ‘green crap’ comments tell us a few things: it illustrates the death of the Tory modernisation project (again) and is a direct consequence of Ed Miliband making the political weather.

But perhaps most worryingly for the Conservatives it shows a misreading of public opinion and the significance of the green vote.

The death of the Conservative modernisation project is now firmly established as political common sense. The corridors of Whitehall are littered with policies presenting as incriminating evidence:

None of this will worry the Conservative Party much. The rank and file never really believed in the modernisation project; it may also calculate that Miliband’s price freeze will be forgotten by 2015 if GDP growth is healthy enough.

What should worry the Conservative Party is the way in which Cameron’s ‘green crap’ comments represent a misreading of public opinion. Tom Newton Dunn writing in the Sun newspaper today asserts that:

“There were once centre ground votes in green politics. Now they are seen as a costly extravagance.”

Fabian Society research shows that the evidence points in a different direction. Polling by the Fabian Society and WWF undertaken last year showed that a majority of Labour and Liberal Democrat voters support shifting to a low-carbon economy – as do more Conservative voters than not.

Crucially support among swing voters – the group that’s crucial to deciding the outcome of the next election – was even higher. The voters that the Conservatives need to win over to improve on their 2010 election showing are far more supportive of the transition to a low-carbon economy than David Cameron realises.

This plays out on the ground in a host of important election battles. Some of them don’t involve Conservatives so may not appear on Cameron’s radar – a foolish error.

An example is Hornsey and Wood Green where the Liberal Democrat incumbent Lynne Featherstone has an increasingly vulnerable majority. Voters in this seat care passionately about the environment – a host of green activist groups meet and campaign regularly in the seat. They will mind that their MP has voted against a 2030 decarbonisation target and is propping up a Conservative-led administration whose leader dismisses their key concerns as ‘green crap’.

The impressive Labour candidate Catherine West would do well to capitalise on this weakness. And it is in seats like this where the 2015 election will be decided.

As Marcus Roberts has shown, winning over those who voted Lib Dem in 2010 will be key for Labour in constructing a coalition of voters that will put Ed Miliband in government. The green agenda really matters for this to work.

But David Cameron’s abandoning of the green agenda will matter in Conservative marginals too. As Lord Ashcroft has demonstrated, Cameron was a huge asset for the party at the last election. In 2010 plenty of new voters (although not enough to provide Cameron with an outright majority) opted for the Conservative party because of David Cameron. They believed in his modernisation project.

While Tom Newton Dunn is wrong about the lack of votes that come from the green agenda, he is right about something else:

If David Cameron continues to perform like this, where he was once an electoral asset he will become a liability.

Conservative MPs and party activists don’t take kindly to leaders who become electoral liabilities. Just wait until the spring time when Cameron will be facing Nigel Farage and UKIP in the European elections. It’s going to be a long winter for David Cameron. And this time there will be no husky to keep him warm.