Israel’s worst fear is the P5+1 signing a deal that leaves Iran closer than it can live with to a nuclear bomb. 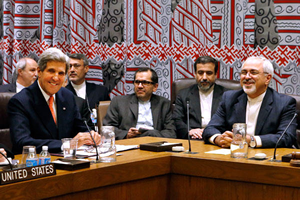 Dr.Toby Greene is director of research for BICOM and deputy editor of Fathom Journal

The high diplomatic drama surrounding the P5+1 talks with Iran generated a remarkable sight in Israel. Prime Minister Benjamin Netanyahu turned to the cameras and pleaded for US secretary of state John Kerry not to sign the deal. He called it a ‘historic mistake’, arguing in effect that it would allow Iran to get closer to a bomb and relieve sanctions, all at the same time.

With not all members of the P5+1 satisfied with the text, Netanyahu got his wish for now, but negotiators will reconvene on 20 November. Kerry and Netanyahu have spent dozens of hours discussing this issue in recent month, so why has it come to this?

The difference is not about what Iran is up to. Israel, the US and the major EU powers share the assessment that Iran’s programme is intended to give it the capacity to build nuclear weapons at its time of choosing.

Nor it is about basic strategy. Israel and the Western capitals agree that Iran with a bomb would be disastrous for regional security and the non-proliferation regime. Israel would much prefer Iran to concede without a shot being fired, and helped rally the US and Europe to create genuinely punishing sanctions, which brought Iran to the table.

The differences are over what is a tolerable final outcome – which the US and other powers have not yet defined – and the process to achieving it.

The P5+1 and Iran are negotiating a two stage deal, with the weekend talks focussed primarily on the initial confidence building measures. This interim deal is Netanyahu’s most immediate concern. The idea is that Iran will stop producing 20 per cent enriched uranium (which can very quickly be turned into weapons grade), allow more inspections, and not activate new centrifuges enriching to 3.5 per cent.

In return Iran gets sanctions relief, which US officials call “limited, targeted, and reversible”, but which includes freeing up overseas assets and relaxing trade restrictions worth tens of billions of dollars. This is supposed to pave the way for a final deal in six months.

Netanyahu believes the relaxation of sanctions will not only give Iran critical economic breathing room, but disrupt the momentum of ever increasing pressure which is vital for forcing Iran to climb down.

What Iran is being expected to give in return is seen by Israel and other sceptics as wholly inadequate. During the six months when the final deal is supposed to be negotiated, Iran can keep enriching uranium to 3.5 per cent. Under the original draft it could also continue to develop the Plutonium reactor at Arak – one of the issues which triggered French objections.

In this deal, nothing will be permanently decommissioned in the first stage. That means if there is no deal after six months, Iran can immediately resume suspended elements of its programme, including thousands of new, advanced centrifuges which could convert the 3.5 per cent uranium to weapons grade within weeks.

So a significant crack will be put in the wall of sanctions, in return for which the nuclear clock will merely be slowed, rather than stopped. This is why Netanyahu calls it the ‘deal of the century’ for the Iran, and a ‘historic mistake’ for the world powers.

Those advocating the staged deal say President Rouhani and foreign minister Zarif need concrete benefits to empower them against the hawks back home, in order to conclude the big deal. By contrast the prevailing view in Israel, along with many other sceptics, sees Rouhani as ‘flesh and blood of the regime’, whose diplomacy is a tactic to reduce the pressure of sanctions, and who in any case answers to the Supreme Leader.

For Israelis, this whole process appears to show the US and other Western powers as too keen to get a deal, even a poor one, to get rid of the issue and avoid having to grapple with military options.

It is not only Israel that is deeply concerned. Saudi Arabia and other Gulf states are anxious about Iran cutting a deal with the US which leaves them with the capacity to get the bomb. French foreign minister Laurent Fabius also warned, on viewing the proposed text on Saturday, against the world being played for fools. So Israel is not the only one wanting a tougher line, but it has specific sources of anxiety.

First, Israel’s proximity to the threat heightens its sense of urgency. It feels most immediately threatened, both by the possibility of an Iranian strike and the regional impact of an Iranian bomb, which would empower Iran and its allies, and likely trigger a regional arms race. The possibility of radical theocratic regime having the power to annihilate the Jewish state, also makes Israel more ready to countenance the consequences of a military strike than the Europeans or the US.

Though not all Israelis share Netanyahu’s apocalyptic view, the Prime Minister sees it as his historic mission personally, and indeed the very purpose of the Jewish state, to prevent a future Holocaust.

Second, there is a gap between Israel and the US in military capability, and therefore in room for manoeuvre. As Iran’s nuclear programme grows, the capacity for Israel to degrade it militarily diminishes. The US, with its far greater military capacity, would have military options beyond the point at which Israel’s window closes, and could possibly tolerate Iran closer to the threshold.

The problem is, Netanyahu does not believe he can leave the military option in the hands of the US, especially after Obama went wobbly over Syria. He believes that if the international community fails to push Iran back from the threshold, it will be his responsibility to take military action whilst Israel still can.

Israel’s worst fear is the P5+1 signing a deal that leaves Iran closer than it can live with to a nuclear bomb. This would make the decision on military action even more fraught. Israel believes it has the capacity to set the Iranians back a few years, but it needs international diplomatic support to stop Iran rebuilding afterwards.

The hiatus in the next two weeks will see an intense effort by Israel – and more quietly the Saudis and others – to get the P5+1 to toughen the deal, and avoid its worst nightmares being realised.