It shouldn’t be left up to ordinary students to organise against the privatisation of the student loan book. We both need and deserve better from NUS. 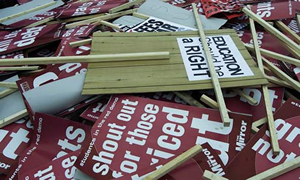 What could be more outrageous than the undemocratic trebling of tuition fees, or the fundamentally anti-working class policy of scrapping EMA, denying thousands of poorer students their chance at further and higher education?

After the attacks on FEs, raising fees for adult learners and axing half a million places, where could the coalition sink next?

The sell-off of the student loan book to private companies is like a bizarre thought experiment in how to invent an unjust policy without democratic mandate.

Imagine a policy that would retrospectively increase tuition fees, move a huge sum of public debt into private hands, cost the government money in the long-run, and plunge students into even higher debt.

Just as some called the privatisation of the Royal Mail an example of an industry that should never be privatised – profit-making, natural monopoly, excellent public service – the sell-off of the student loan book is the latest attack on students from a government that have taken so much and given so little in return.

The government has confirmed this policy, and also commissioned a report by the Rothschild bank called ‘Project Hero’, which explained how the policy will raise £10bn of cash in the short term.

According to academic and education analyst Andrew McGettigan, this can be done in one of two ways.

Firstly, the government could offer a guarantee to private investors, called a ‘Synthetic Hedge’, where public money backs private investment: a PFI for your loans, if you will.

The second option is the more nightmarish: the government will remove the cap on interest rates in your loans, allowing companies who buy your debt to crank up the loan repayments retrospectively. This is the stated intention of the Rothschild report, and it should be considered as government policy.

“In the letter that every student gets there are some words to the effect that governments reserve the right to change the terms of the loans.”

How appropriate that Willetts was on the receiving end of a banner-drop at the Oxford Union two weeks ago. If only some graduates, who are likely to see their fees effectively raised by this policy, could have joined us in the Union to express their completely understandable feelings of disgust through the ‘Fuck You Willetts’ banner.

This policy has worried many of the more politically apathetic students I have explained it to. But why should it not, when it will take money out of their pockets? If changing the terms of a student loan sounds like something that not even this government would consider, then take the example of New Zealand, who recently retrospectively changed the interest rate on student loans from 10 to 12 per cent.

We wouldn’t accept this sort of behaviour from a commercial loan, so why should we accept it when it comes from the Student Loan Company?

Yet accepting it is exactly what our student leadership have done. The president of the NUS, Toni Pearce, in a recent blog post that celebrated her ‘win’ on this issue, wrote:

“We are pleased to report that our pressure paid off. David Willetts has subsequently written to us to confirm that the government will not change the method of determining interest rates for those borrowers who took out loans prior to the introduction of the 2012 funding system.”

How reassuring to know that the NUS president can influence government policy through having coffee with the Tories!

NUS’s stance is not inconsequential. By claiming that the issue is settled, the NUS are pouring water over any attempts to agitate and organise students to fightback against seeing their loans fall into private hands and their tuition fees retrospectively hiked.

Thankfully, both the Student Assembly Against Austerity and the National Campaign Against Fees and Cuts, both of which I am a member, are holding a Day of Action on the 20th November.

It shouldn’t be left up to ordinary students to organise over this. We both need and deserve better from NUS.

12 Responses to “Selling-off the loan book would be the government’s most outrageous attack on students yet, so why aren’t we more concerned?”