Iran is not our friend, however smiley and polished their foreign minister is, and this deal has not solved any of the problems over Iran's nuclear programme, much less over its regional agenda. 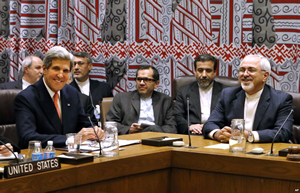 Dr. Toby Greene is director of research at BICOM, deputy editor of Fathom and author of Blair, Labour and Palestine: Conflicting Views on Middle East Peace After 9/11

First the good news, then the reality check.

The good news is that the sight of Iranian foreign minister Mohammad Zarif shaking hands on a deal with the P5+1 states, including the US, is truly extraordinary. For all the flaws in the deal, this should not be overlooked. It is in the interests of the whole world that Iran change the way it relates to the West, and the US in particular.

Such moments have the potential to change perceptions and open minds on all sides, and that is to be welcomed.

The other bit of good news is that thanks to French objections two weeks ago, this deal is not quite as weak as it might have been.

Now the reality check. Iran is not our friend, however smiley and polished their foreign minister is, and this deal has not solved any of the problems over Iran’s nuclear programme, much less over its regional agenda.

Iran’s policies remain diametrically opposed to Western interests: opposing the Israeli-Palestinian peace process; backing the Assad regime in Syria; backing armed extremists like Hezbollah and Hamas; the list runs on and on.

Nor can we forget that that Zarif and Rouhani answer to the Supreme Leader, and the clue is in the job title. In a televised speech last week Ayatollah Khamenei said Israel’s leaders “cannot be called humans” and that Israel is, “doomed to failure and annihilation,” whilst the crowd chanted “death to Israel” and “death to America”.

If we don’t like Iran without a nuclear weapon, we’ll like it much less with one. So what about that deal?

Iran has signed up because it needs to ease the sanctions hurting its economy. In return for the partial easing of sanctions agreed this week, Iran will hit the pause button on its nuclear programme for six months.

Contrary to claims, it has not rolled its programme back. True, its stock of 20 per cent enriched uranium will be diluted or converted to less immediately dangerous oxide form. But advances in Iran’s enrichment capacity mean it could convert its 3.5 per cent uranium into weapons grade within two months, making this concession much less relevant.

Now put the six months in context. Iran is playing a long game. Having pursued the capacity for nuclear weapons since the 1980s, they are almost there. They have a stock of 3.5 per cent enriched uranium for several bombs. They have the capacity to enrich it to weapons grade quickly in hardened facilities. They have missiles that can carry the bomb. They have a heavy water reactor capable of producing weapons grade plutonium within 12 months of activation. They have done research on weaponisation.

In effect, they have hit the pause button in the eighty-fifth minute.

Those advocating this deal argue that it keeps Iran from advancing for six months, that it will empower pragmatic elements in Iran to make a comprehensive deal, and that the sanctions relief is limited and reversible. Opponents say the sanctions are like the walls of a dam that have been breached, in return for which Iran is giving next to nothing. The test of this argument will come in six months. But what is conspicuously absent in the interim deal is any clear idea of what the end game will look like.

Iran is a country that signed the NPT, then violated all its rules by building a huge, underground, secret programme designed to give it nuclear weapons (keep this legacy of deceit in mind when Zarif talks about ‘respect’ and ‘trust’).

Despite getting caught, Iran has kept on going. Now it is in touching distance of a bomb. Pausing the programme as an interim arrangement is one thing, but the goal has to be for Iran to rewind, and undo the dangerous capacities it developed illegally.

Iran should be years away from having the fissile material for a nuclear bomb, not weeks away as it is now. That means any uranium enrichment capacity must be minimal and closely monitored, and that any potential for the reactor at Arak to produce plutonium must be curtailed.

Iran has paid a very heavy price for its illicit nuclear project and will not unravel it unless compelled to do so. The prospect of renewed and increased sanctions, and the possibility of military action against Iran’s nuclear facilities, are the leverage the US and its allies have in this process. Both must be in place to create the best possible chance for a deal that truly puts nuclear weapons beyond Iran’s reach.

2 Responses to “Iran hit pause, we need it to rewind”