The left-right divide is an important divide in British and international politics, but far from the only one. 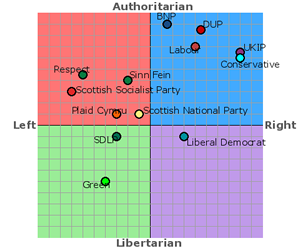 The Daily Mail’s leaking of Mehdi Hasan’s letter to Paul Dacre did not reveal Mehdi’s hypocrisy, merely an uncomfortable truth: these days, if you want to write for any outlet, you will probably have to disregard profound political differences with it while capitalising on the ground you share.

That a left-wing journalist like Mehdi should admire some of the Mail’s values while loathing others is almost inevitable. For though the model of a simple binary political division between the Left and the Right may have appeared plausible during the 1980s, today it no longer does, and boundaries are increasingly blurred.

In Britain, old-guard Bennite leftists consider it axiomatic that to be left-wing is to oppose Western military intervention. Yet it was Tony Blair’s Labour government that pioneered liberal interventionism via Kosovo, Sierra Leone, Afghanistan and Iraq, while much of the conservative right has reacted against the idea of risking British soldiers’ lives to help foreigners.

David Cameron – Blairite in foreign affairs – could not mobilise enough of his own parliamentary party to win the vote for intervention in Syria. Liberals are more likely to support intervention in defence of human rights and popular revolutions abroad, while conservatives often view dictators like Assad and Mubarak as positive factors of stability.

Hostility to immigration and Islam are the principal purposes of radical right-wingers in Western Europe today. Yet they employ the language of class to oppose immigration, and portray a metropolitan elite prepared to sacrifice the culture and living standards of the white working-class in order to have more cheap baby-sitters and exotic restaurants.

They also raise the banners of women’s rights and gay rights to attack Muslims and Islam. Conversely, some on the left are reluctant to criticise sexism, homophobia or anti-Semitism among Muslims for fear of pandering to Islamophobia. Supporters of a niqab ban cite female emancipation while opponents cite freedom of expression; both draw upon liberal principles.

Opposition to the EU is the Tory cause celebre, yet it was a Conservative prime minister, Edward Heath, who took Britain into the European Economic Community in 1973, while ten years later it was Michael Foot’s notoriously left-wing Labour opposition that advocated withdrawal.

British liberals are more likely to be ‘pro-Palestinian’ and conservatives ‘pro-Israel’, yet the former often find themselves aligned with conservative Muslims on the issue and the latter with liberal Zionists. Gay marriage is viewed as a liberal cause, yet the institution of marriage is trumpeted primarily by conservatives.

Conservatives like to claim that the right is inherently anti-state while the left is pro-state. Yet Republican president George W. Bush presided over a huge expansion in the US Federal government, while anarchists are arguably the most left-wing and anti-state of all.

Green politics are generally viewed as left-wing, yet many greens and conservatives share common ground, whether in their dislike of modern industrial society, love of the countryside, idealisation of traditional small farmers or fear of third-world population growth.

Opposition to abortion is usually viewed as a right-wing cause. Yet the US is home to a burgeoning liberal and feminist pro-life movement, while even conservative pro-lifers have taken up the causes of traditionally marginalised groups that are targeted in abortions – not only the babies themselves but also the disabled in the West and women in India and China.

Conversely, supporters of abortion adopt the rhetoric of unconstrained personal autonomy and self-interested choice that echoes the values of the libertarian right.

Looked at closely, there are few issues that are strictly left vs right. In fact, there is only one: the left supports the redistribution of wealth from the rich to the poor while the right opposes it. All genuinely left vs right questions are derivative of that.

Again, the categories are subverted, as policies generally seen as right wing –  introducing university tuition fees; cutting benefits – are sold as redistributing money toward industrious working-class families. Nevertheless, Britain’s present coalition government deserves to be labelled right-wing, as its principal purpose has been to preside over a large-scale transfer of wealth away from the working and ordinary middle classes and toward the wealthy.

Consequently, to be left-wing in Britain today is to side with popular resistance to the government’s anti-redistributive policies; with anti-austerity protesters and striking workers; with those who campaign to defend their public services and welfare state.

This makes the left-right divide an important separation in British and international politics, but far from the only one. Leftists and rightists are as likely as not to find themselves on the same side of a political dispute; for example, to agree over military intervention while disagreeing over spending cuts.

To cling to a ‘left-wing’ or ‘right-wing’ tag may primarily reflect one’s sense of identity and emotional need to belong to one tribe and to define oneself against the other. Yet at least occasionally, every principled and free-thinking individual must disagree with the tribe.

28 Responses to “What does it mean to be left wing today?”