I first met Tommy yesterday morning and spent most of the day having brief conversations with him as I helped co-ordinate media requests for Quilliam. I believed Tommy when he told me that he is not a racist and does not hate ordinary Muslims. 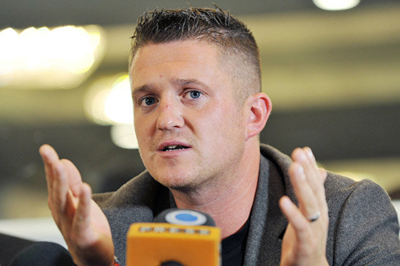 Tommy Robinson, the former leader of the English Defence League (EDL), announced his departure from that organisation yesterday and simultaneously upset a lot of people.

Those most upset were not members of the EDL or his previous sympathisers as one may have expected. Rather it was the usual coterie of trendy wine bar types who just weren’t buying it and, somehow, knew better.

This denial was followed up by attempts to expose his recent tweets and currently held positions on a number of issues, with view to convincing the world that he hadn’t changed at all and was still the nasty little Nazi we all knew he was.

Even those with a history of making bigoted statements themselves were quick to point out that he hadn’t moved far enough towards a more enlightened world view.

Such an approach towards the Robinson defection story is both lamentable and, sadly, predictable.

An old Chinese proverb goes ‘A journey of a thousand miles begins with a single step’. Tommy’s defection from the EDL, an organisation that he helped form in 2009, represents a first step in a positive direction. His defection was accompanied by regrets, apologies and clarifications, as well as a continued adherence to some positions that many may find unacceptable.

However, this move will take the wind out of the EDL’s sails and, hopefully, signal the start of the end for the thuggish street protests we have all come to associate with the EDL brand.

His defection does not represent an overnight transformation into a new reformed character, nor does it signal the arrival of the English Ghandi. In many respects we are still dealing with the same Tommy, albeit with a wiser head and a better understanding of how to get his message across. To point to unacceptable views or actions as evidence that his defection has no significance is to miss the point completely.

I first met Tommy yesterday morning and spent most of the day having brief conversations with him as I helped co-ordinate media requests for Quilliam. Unless my normally sharp instincts for bigotry, hatred and racism, gained from growing up in a very violent, and often racist, working class community in the Midlands, had completely deserted me, I believed Tommy when he told me that he is not a racist and does not hate ordinary Muslims.

He also told me that he is passionate about fighting extremism in this country and speaking out against it, which it the right of every British citizen.

He maintains the EDL was never meant to be a racist or even an anti-Muslim organisation. In his view, it adopted the wrong tactics and, owing to the lack of tight control and management, got infiltrated by more extremist elements as it developed. This narrative is plausible, except speakers at EDL rallies, such as Gurmit Singh, often did espouse blatantly anti-Muslim views to rapturous applause.

In truth, it began as a mere reaction to taunts and threats directed at our Armed Forces, by Islamist extremists, which culminated in the beheading of Drummer Lee Rigby earlier this year. It was out of control from the start, the line between anti-Muslim and anti-extremist rhetoric was blurred and it soon morphed into a beast that no-one could control or steer in a clear direction.

Tommy is clearly a work in progress and, to his credit, he acknowledges that. He has taken a bold step in leaving the EDL and his immediate future is uncertain. What he needs right now to support and guidance so that he can channel his grievances in a more positive and mainstream way.

He also needs to learn to be clear about his message, if it is indeed misunderstood, and work in unison with people of all faith and race backgrounds in order to address hate and prejudice in our society.

In this regard, Quilliam will be working with him in order to provide the guidance and training necessary, but even this arduous and challenging work can be derailed if he is not given the time and space to develop.

Right now, this is the best outcome that could have been expected, given Tommy’s journey thus far. Of course, no one has a crystal ball and it’s not clear what the future holds. However, it has taken a lot of hard work by people who are driven by a strong desire to create a safer and more inclusive Britain to get things this far.

Everyone has a right to criticise and point to faults but armchair critics and keyboard warriors, who wear their politics as a fashion item and claim to speak for a working class they have never met, should not be surprised when they are not taken seriously.

Especially since so many are all too willing to overlook similar faults when dealing with figures from minority communities, who they hold to a lower standard and wish to instrumentalise for parochial and petty political gain.

14 Responses to “Criticise if you will, but Tommy Robinson’s leaving the EDL is a positive move”