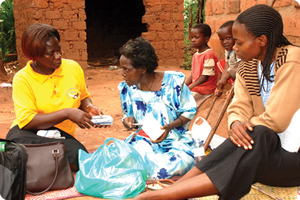 Palliation – literally, the removing of symptoms of life-limiting illnesses such as pain – has been brought sharply into focus in Africa due to the dual burden of an ageing population and an increased disease burden.

To give just one example, 70 per cent of people living with HIV worldwide live inside sub-Saharan Africa, a region which constitutes only 12 per cent of the global population.

Millions of these people in sub-Saharan Africa require palliative care to address the medical/physical, social psychological and spiritual challenges as a result of the life-limiting illnesses.

Despite the large demand, there is still little palliative care provision across much of Africa. Many countries do not have any element of palliative care: no hospices, no formal training for medical professionals, no or little integration of palliative care into national health systems and often little public awareness.

It is estimated that only 9 per cent of countries in Africa have palliative care integrated into mainstream health services.

One of the largest challenges facing pain relief efforts in Africa is the availability of, and access to, oral morphine. It is thought that Hospice Africa Uganda, a centre of excellence of palliative care in Uganda, can mix a three week supply for a patient for ‘less than a loaf of bread’.

Despite this, oral morphine is still not widely available to most Ugandans, let alone the rest of Africa.

Bernadette Basemera, a palliative care nurse based in Kampala, explains part of the problem:

As a result of this fear, millions do not have access to morphine and suffer unnecessary preventable pain.

In recent years however, there have been signs that this might be a thing of the past. In the last two years alone four countries – Rwanda, Swaziland, Tanzania and Mozambique – have all adopted stand alone palliative care policies.

Although policy development does not immediately translate into oral morphine availability, a number of countries such as Kenya, Nigeria, Zambia, Namibia Ethiopia and a few others have improved access to oral morphine. Meanwhile Hospice Africa Uganda, in a partnership with the Ministry of Health of Uganda, continues to produce and distribute oral morphine whilst at the same time offering training courses to practitioners from all over Africa.

At the heart of these developments are passionate workers like Bernadette. Once again working late, Bernadette describes why she wants to work in palliative care, saying:

“Palliative care is the sort of care that you would hope you and everyone you care about receives. No one wants to think of a loved one suffering unnecessarily.”