Today’s labour market statistics show that for most people this doesn’t feel like a recovery. 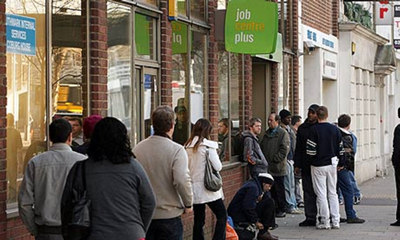 The monthly composite of PMI surveys suggests that growth is running at its fastest pace in 16 years whilst NIESR estimate that GDP will expand by a healthy 0.8 per cent in the third quarter.

However today’s labour market statistics show that for most people this doesn’t feel like a recovery.

But for every silver lining there was a cloud – a record number of people are now working part-time because they could not find a fulltime job (18.5 per cent of all part-time workers report they would rather have a full-time position), youth unemployment remains stubbornly stuck around the one  million mark and long-term unemployment remains a  serious challenge.

But most worryingly of all is the collapse in earnings growth.

As the ONS notes, regular pay growth has never been lower in the current series of data. 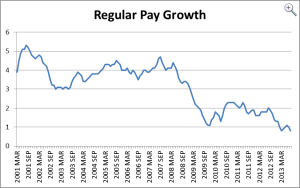 As the chart above makes clear, regular pay growth was generally around 4 per cent a year before the recession, and then collapsed during 2008 and 2009, before bouncing back to around 2 per cent a year for much of 2010 and 2011 (still well below inflation). Over the past year it has been falling again.

Prices have been outstripping wage gains for well over 40 months, making this the longest squeeze in real wage since the 1870s. The real reason why Britain is undergoing a ‘cost of living crisis’ is not high inflation (it has been much higher in the past), but weak nominal wage growth. This is a pay crisis.

Back in September the chancellor argued that the economy had turned a corner. He went to say that:

“Our plan for the economy is a plan for living standards.”

His basic argument was that getting the economy moving again would be enough to protect living standards for the majority.

This does not seem to be the case, nor is there any reason to think it necessarily should be. As work by the Resolution Foundation has demonstrated, it is perfectly possible for the economy to grow whilst real wages stagnate – between 2003 and 2008, GDP expanded by 11 per cent but median real wages barely budged.

What we have seen in recent quarters goes a step beyond this – the economy is growing at a reasonable (possibly even a fast) pace and yet real wages are not just failing to expand or stagnating but actually falling.

The economy appears to be recovering but most people are feeling poorer.

Until regular pay growth picks up this won’t feel like a meaningful recovery.

2 Responses to “Today’s jobs figures: this doesn’t feel like a recovery”