The people of Bahrain have suffered severe repression at the hands of their government and yet the UK continues to support the Bahraini monarchy. 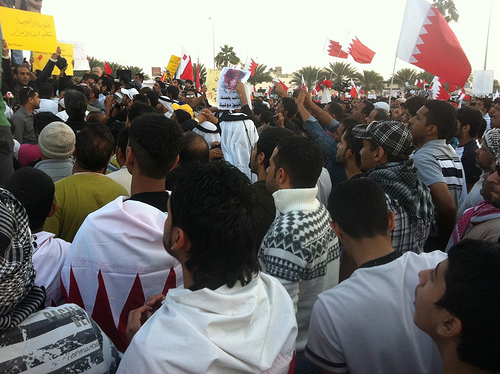 In early August, David Cameron met with the King of Bahrain in Downing Street for the third time since he took office in 2010. The Prime Minister was keen to “reiterate the UK’s support for ongoing political reform in Bahrain”, though according to Human Rights Watch “no progress” has actually been made so far by the government. Hours later, King Hamad had banned protests in the capital city of Manama in preparation for pro-democracy demonstrations planned for the 14th of August- a move described by Amnesty International as an “outrageous” violation of international law.

Over the next few days the Bahraini authorities arrested lawyers, denied human rights activists the right to enter the country and began erecting barbed wire around villages to prevent protests. The Bahraini Prime Minister warned that illegal demonstrations would be met with force, echoing his earlier remarks that the regime would “burn to a cinder all those who seek to tamper with its security and stability.”

Despite the warnings, thousands took to the streets on the 14th of August, the anniversary of Bahrain’s independence from the United Kingdom (an event not celebrated by King Hamad, who insists that “for all practical and strategic purposes the British presence has not changed” since it was a protectorate). As promised, the authorities responded violently, beating and arresting over a dozen protesters and firing tear gas and birdshot at many more.

Political repression of this kind is now a daily reality for many Bahrainis. Since the uprising began in February 2011, the security forces have killed around eighty civilians, among them children who were gassed to death in their own homes. Thousands more have been arrested for taking part in protests, and hundreds are reported to have been tortured in state custody.

The regime has sought to justify the crackdown as part of a larger war on terror, using the pretext of Iranian aggression to smear the Shia-led pro-democracy movement as some sort of proxy for Tehran. But Bahrain’s own Independent Commission of Inquiry and diplomatic cables released by Wikileaks have shown that there is no evidence of Iranian involvement in the unrest.

Yet still Britain continues to reiterate the regime’s propaganda about a “foreign plot.” Ambassador Ian Lindsay has “condemned Iran’s meddling” in Bahrain, accusing Tehran of “providing support to people who are bent on violence” and even going as far as publishing pro-regime smears about the protesters on the British government website.

But the clearest example of foreign “meddling” has come not from Iran, but from the Kingdom of Saudi Arabia, which in 2011 sent its National Guard in to support the crackdown, using British armoured vehicles to do it. Naturally this warranted no such criticism from Ambassador Lindsay, despite the findings of the Chairman of the Parliamentary Committee on Arms Exports Controls that the vehicles “facilitated extreme violence against civilian demonstrators and very serious human rights abuses” in Bahrain.

Later that year, birdshot pellets made by the British arms company Gamebore were found to have been used against Bahraini protesters, eleven of whom have been killed by birdshot since 2011 (though it is not clear what make of pellets were responsible). Britain has also supplied the country with FinFisher spyware which was then used to target pro-democracy activists in London, Washington and Manama.

Throughout the crackdown Britain has loyally remained one of the regime’s closest allies and biggest military suppliers, while the Bahraini people have reportedly suffered the single largest decline in political freedom of any Middle Eastern nation in the last five years. The tear gassing, torture, house raids and jailing of dissidents continues unabated. Britain had the chance to condemn these practises at the UN Human Rights Council in 2012 along with 28 other countries, but chose to remain silent (as did the United States).

Britain is now moving to cultivate an already “deep-rooted relationship” by “developing even stronger economic and political ties” and expanding military cooperation with Bahrain. This includes regular invitations to policing and security-based events like the Counter Terror Expo in London, attended in April by King Hamad’s son, the alleged torturer Shaikh Nasser. Bahrain is also extremely likely to be invited to this September’s DSEi arms fair in East London, where the regime will get the chance to stock up on the weapons it needs to continue its suppression of the protest movement.

Currently, Bahrain is in talks with BAE Systems for a major new arms deal, reportedly worth over £1bn, in which “the British government are leading discussions.” This comes at a time of unrelenting political repression, demonstrating clearly the priorities of the British government: trade and regional stability.

Alistair Burt, Under Secretary of State at the Foreign Office, makes clear the government’s position: “we do not see a reason to challenge the assumption” that “the governance of Bahrain is more secure under” the monarchy.

This should hardly be surprising. Clearly, it would not be in Britain’s economic or strategic interest to see a friendly monarchy overthrown by people power and a democratic republic emerge in a region ruled by a consortium of Western-aligned monarchies. The domino effect this could have on the Gulf states would bring serious instability to a region which is of “vital importance to our economy” and is apparently host to over the half the world’s oil reserves and two fifths of its gas reserves.

Furthermore, democracy in Bahrain would probably see a Shia-led government elected, given the country’s demographics. This would give an enormous shot in the arm to the marginalised Shia population in the neighbouring Eastern Province of Saudi Arabia, home to most of the Kingdom’s oil reserves, who might take inspiration from political change in Bahrain and rise up against their own Sunni rulers.

But the United States has made clear it will not tolerate democratic revolution and upheaval in Saudi Arabia. In 2011, President Obama’s Chief of Staff said that “the possibility of anything (like in Egypt) happening in Saudi Arabia was one that couldn’t become a reality. For the global economy (a reference to Saudi oil), this couldn’t happen.” There is, according to a 2012 report by the Senate Foreign Relations Committee, “a correlation between stability in the Gulf and the United States’ economic health.” As a staunch ally of the Saudi monarchy and the other Gulf states, Britain is likely to share the American position on this.

Bearing this in mind, the possibility that Britain will throw its weight behind the pro-democracy movement in Bahrain is virtually non-existent. Britain has firmly taken the side of a repressive monarchy against a people in revolt, and will continue to tolerate Bahrain’s rapidly deteriorating human rights record in order to to preserve the “stability” of regional autocracy and defend a favourable status quo.

4 Responses to “Siding With A Tyrant: British Policy Towards Bahrain And Its People”