Clear support from Labour for green growth can only be positive, and will hopefully be emulated across the political spectrum. 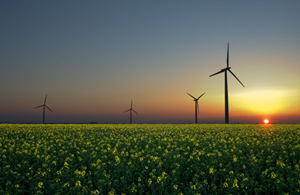 On Monday, our fringe event asked “Should We Drop Green Growth During Austerity?”.

Across the panel, from politics to academia, the answer was a resounding ‘No’.

Iain Wright MP explained: “If we are to remain competitive, we can’t not think of a low carbon economy”, and professor Paul Ekins spoke of the pressing environmental need – as shown by the upcoming IPCC report.

A day later, and this message was mirrored by the party leadership. Ed’s stance on green growth was boldly declared:

Decarbonisation of the energy market and one million green jobs cemented this approach in policy, as Miliband used his own children to bring home the moral duty to future generations. He would also speak of the need to listen more to young people, including those “who demand that we don’t shirk our responsibilities to the environment”.

While it may be the energy price freeze that has seized the headlines, this represents a great shift in environmental leadership.

Ed has always seemed linked with DECC since his tenure as shadow minister there from 2008-10, but environmental policies have rarely been central policy in his time as leader of the party. Their inclusion therefore in this crucial speech suggests a party recognising the need for long-term vision and sustainability.

By advocating green growth, parties can both tackle the likes of unemployment and British competitiveness, as well as establish environmental credibility.

Environmental credibility, a notion which Paul Ekins spoke of much during his panel speech, is further strengthened by youth engagement. Climate change and sustainable development are both issues by which young people will be most affected. Recognition of this intergenerational responsibility marked out a number of points in Ed’s speech, from youth employment to party reform, and was exemplified by giving 16/17 year olds the vote.

By involving young people, politicians will hopefully listen and act on their concerns about climate change that will cause food poverty, refugee crises and sea level rise if left unchecked.

The Decarb target, which would see zero-carbon energy by 2030, also furthers green growth. In effect it injects confidence into the low carbon energy market, with businesses more likely to invest with government backing of the sector. Currently energy uncertainty, including the likes of the sudden cutting of the feed-in tariff, has made some wary of investing. The policy, like Ed’s rhetoric on climate change, is extremely important in its symbolism; a party which will favour clean energy.

Ed Miliband’s speech was by no means perfect. Policy wise there is much doubt on the difficulties of both freezing energy prices and achieving a zero carbon energy market by 2030. There was no mention of retrofitting, which many argue could lower energy bills, not just freeze.

With regards to the lower voting age, young people are often wary of politics or feel removed, and it is to be seen whether this will engage more. However it is the inclusion of green growth, and the importance attached to it that seem significant. Indeed, across green fringes, green growth has been advocated by those outside of DECC. Chuka Umunna spoke at SERA’s rally of the environment becoming mainstream, integrated.

Climate change, the environment and sustainability appear to be back on the agenda, and part of a wider vision. Clear support for green growth can only be positive, and will hopefully be emulated across the political spectrum.

2 Responses to “Energy may have hit the headlines, but Ed’s green policies are a big move”