The man in the picture, with graphs celotaped to the walls of what appears to be his living room, is the Mayor of London's favourite climate scientist. 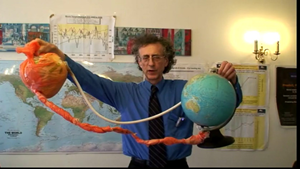 The man in the picture, yes, the one holding the strange contraption in front of graphs celotaped to the walls of what appears to be his living room, is the Mayor of London’s favourite climate scientist.

You are probably unfamiliar with the man, but his name is Piers Corbyn, and he is the brother of left-wing Labour MP, Jeremy.

Corbyn has achieved a level of fame (or perhaps it should be notoriety) for his unique brand of weather forecasting based on solar activities and magnetic fields between the Sun and the Earth. His company, WeatherAction, regularly makes predictions up to nine months in advance – much longer than the period the MET office uses to make its predictions.

However, Corbyn won’t submit his (no doubt meticulous) methods to be scrutinised by peer review, as as a consequence nobody in the mainstream scientific community takes him remotely seriously. Not only that, but his track record in predicting the weather is mixed, to say the least: (Corbyn predicted January 2008 would be a period of intense cold (-17C); it turned out to be one of the warmest Januarys on record). As researchers Ian and Nils Jolliffe put it:

In other words, then, Corbyn is at best an amateur and at worst a crank.

And yet, one person does take him seriously. Not only that, but the individual in question repeatedly cites him as a learned expert in articles in which he questions the existence of man-made climate change. I’m talking about Boris Johnson. Here is Boris in the Telegraph in January of this year:

“A team of Americans and Chinese experts have postulated that the melting of the Arctic ice means that the whole North Atlantic is being chilled as the floes start to break off – like a Martini refrigerated by ice cubes…It is time to consult once again the learned astrophysicist, Piers Corbyn…

“Now Piers has a very good record of forecasting the weather. He has been bang on about these cold winters…According to Piers, global temperature depends not on concentrations of CO2 but on the mood of our celestial orb.”

And further back, in December 2010, Boris called Corbyn “the man who beats the MET at its own game”. He went on to lavish Corbyn with bizarre praise:

“Allow me to introduce readers to Piers Corbyn, meteorologist and brother of my old chum, bearded leftie MP Jeremy…He seems to get it right about 85 per cent of the time and serious business people – notably in farming – are starting to invest in his forecasts.”

Ok, so Corbyn is an eccentric, I hear you say. And a rather benign one, at that. And this in England, afterall, a nation known for its fondness for well-intentioned oddballs.

And yet, it isn’t that Corbyn simply claims to be able to predict the weather. He also, rather unsurprisingly, has views on climate change – views which are about as scientific as his attempts to out-forecast Michael Fish.

Interviewed on Alex Jones’s radio show (that’s the other man wearing the tinfoil hat who shouted at Andrew Neil and David Aaronovitch on the Sunday Politics recently), Corbyn stated categorically that CO2 did not cause global warming. Instead, Corbyn believes in the notion of “global cooling” – an idea which Boris also appears to buy in to.

As Boris has written:

“Piers Corbyn believes that the last three winters could be the harbinger of a mini ice age that could be upon us by 2035, and that it could start to be colder than at any time in the last 200 years.”

The idea that the world is cooling (as opposed to warming) is the latest fad of climate change sceptics; proof, in their eyes, that “the climate change agenda” is little more than a swiz to make us all go back to living off the land, eating seeds and generally being miserable.

The notion of “global cooling” is, of course, like Corbyn’s weather forecasting, utter nonsense. As Phil Plait explains in Slate:

“This is simply wrong. There’s long been a claim that global warming has stopped, but this too is wrong. Surface temperatures haven’t increased as much as they did a decade or so ago, but we now understand that the extra heat from global warming is getting stored in the oceans. Surface temperatures are a piece of the puzzle, but like their name implies, they don’t probe the depths of the problem. Remember too that nine of the 10 hottest years since 1880 have been in the past decade.”

Yet when asked why he continues to cite Corbyn in his articles despite the later’s refusal to have his methods scrutinised by the scientific community, Boris claimed just last week that he “didn’t know” Corbyn’s work was non-peer reviewed.

He didn’t know, despite the fact that simply Googling Piers Corbyn’s name is all it takes to find out as much. And Boris clearly invests enough stock in Corbyn to cite him in articles intended to pour doubt on the idea of man-made climate change. Presumably, then, it wouldn’t be all that hard to find out whether the person you are citing in the national press on perhaps the biggest issue of our times is credible or not. Or maybe that’s just being a pedant.

It’s still a rather bizarre thing for the Mayor of London – a man who some suggest has ambitions to lead the Tory party – to say.