If military action against Assad is morally justified then that surely must be the case regardless of whether or not it is 'legal'. 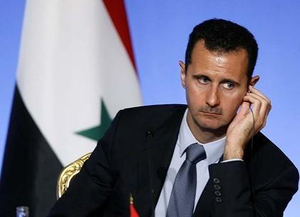 Ed Miliband released a statement on Syria yesterday in which he said he would be willing to support military action against the regime of Bashar al Assad “on the basis that it was legal”.

“When I saw the Prime Minister this afternoon I said to him the Labour Party would consider supporting international action but only on the basis that it was legal, that it was specifically limited to deterring the future use of chemical weapons and that any action contemplated had clear and achievable military goals.”

“We will be scrutinising any action contemplated on that basis.”

The lawyerly emphasis here on perceived legality (or lack of) reminds me of the contortions certain politicians went through in the lead up to the war in Iraq. Rather than come out in straightforward opposition to military action, certain political figures said they could support military action against Saddam Hussein but only if it was backed by a UN Security Council resolution.

In other words, the correctness of removing one of the world’s worst dictators was to be left at the whim of regimes on the UN Security Council which in some cases were bloating and sating themselves at the feet of the Iraqi regime.

Unsurprisingly they weren’t particularly keen on toppling their profitable client.

Opposing the Iraq war was the correct position to take in my view; but that was evidently the case whether military action was vetoed by certain post-Communist autocracies and morally bankrupt French politicians or not.

The same is true today of Syria: if military action is an appropriate response to genocide and the use of chemical weapons, that remains the case even if the thuggish tyrannies of Russia and China feel differently.

If Miliband is genuinely serious about not supporting military action unless it is “legal”, and if by legal he means endorsed by a resolution from the UN Security Council, then he is either being deliberately obtuse to differentiate his position from that of David Cameron, or he has no stomach for military action and wishes to couch that in lawyerly references to ‘legality’.

Viewed from the angle of UN legality, military action against Assad cannot possibly be legal: Turkeys don’t vote for Christmas and Russia will not assist in fastening the hangman’s rope around the neck of its client in Damascus.

If military action against Assad is morally justified then that must be the case regardless of whether or not it is ‘legal’. For, as Norman Geras puts it:

“A system of law that would countenance mass atrocity without any remedy simply because the interests of a veto-wielding power at the UN blocks remedial action is morally unacceptable, indeed intolerable.”

10 Responses to “Syria: Politicians should act as leaders, not try to be lawyers”