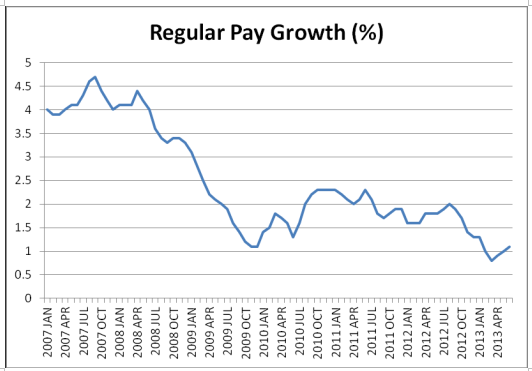 The latest labour market statistics showed that unemployment fell by 4,000 and the unemployment rate (now the focus of the Bank of England’s attention) remained steady at 7.8%.

The broad picture of the labour market remained consistent with that of recent months – a few encouraging signs but still marked by serious weakness.

Much attention will no doubt be placed on the earnings figures, which at first glance, seem to show some encouraging signs.

The growth of total earnings (as measured by the standard three month average period on the same period last year) rose by 2.1%. That is still well below inflation but would represent the fastest earnings growth in over two years.

However there is a real need for caution in looking at this data.

Regular pay growth is running at only 1.1% (compared to RPI of 3.1%) whilst bonuses payments soared in April, seriously distorting the three month average figures.

The reason for this soaring of bonus payments is not hard to find – the pre-announced cut in the 50p rate of tax to 45p. This has had the effect of moving income from the end of the previous financial year into the current one, depressing the earnings figures for the first part of this year and boosting them for them now.

Looking at regular pay growth (and so excluding the impact of bonuses) the picture is much clearer:

If anything regular pay growth appears to have slowed since 2012.

The ONS itself today notes that:

“The relatively high growth rate for April to June 2013 partly reflects unusually high bonus payments in April 2013. Some businesses have reported that they [hadn’t] paid bonuses in March last year but in April this year.”

This is something the Bank of England also anticipated in its most recent Inflation Report, arguing that:

“The reduction in the top rate of UK income tax is one factor that helps to explain the pattern of both bonus payments and regular pay growth since the beginning of 2013. In March 2012, it was announced that in April 2013 the top rate of income tax would fall from 50% to 45%.

“It is likely that some individuals were able to defer earnings that they would have otherwise received in 2013 Q1 to take advantage of that tax change. Based on Bank staff estimates, it is plausible that underlying private sector regular pay growth has remained close to 1% since the start of the year.

It would appear that for most the real squeeze in earnings is continuing whilst a few at the very top have managed to game the tax system to boost their take home pay even further.

Real household disposable income was still below its pre-recession peak in the first quarter of this year. At a comparable point in the 1990s recovery it was up 12%. Today’s figures once again demonstrate that for most people, this doesn’t feel like a recovery.

One Response to “Labour market still marked by serious weakness”