Whilst it is easy to rattle off reasons why things won’t work out in the Israeli-Palestinian peace process, it is important not to overstate these, nor to lose sight of factors which could play in favour of a successful outcome 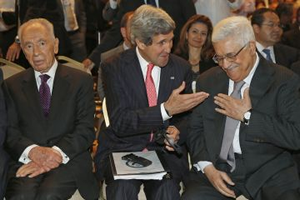 Whilst it is easy to rattle off reasons why things won’t work out in the Israeli-Palestinian peace process, it is important not to overstate these, nor to lose sight of factors which could play in favour of a successful outcome

If a sustained period of final status negotiations does indeed follow US secretary of state John Kerry’s announcement on Friday, it will be the fourth attempt to negotiate a final status agreement.

The first two attempts – under Ehud Barak and Yasser Arafat in 2000, and under Ehud Olmert and Mahmoud Abbas in 2008 – saw substantial narrowing of the gaps but no deal.

The third attempt, between Benjamin Netanyahu and Mahmoud Abbas in 2010, collapsed when the Palestinians abandoned the talks after just three weeks, due to the expiry of an Israeli settlement moratorium.

The stakes therefore are high, as a fourth failure will increase questions over the viability of a negotiated agreement. What then are the chances this time of the parties getting into a serious process and actually reaching a deal?

Pessimism is popular and not without reason. Past failure has not been for lack of effort, but due to real differences between the parties. The leaders face major difficulties overcoming their own hesitations, and manoeuvring their political systems to accept historic compromises which challenge significant aspects of their national identities.

Each side faces domestic scrutiny, with opponents looking to throw spanners in the works. Netanyahu faces opposition within his coalition from members of his own party and from the Jewish Home party led by Naftali Bennett. Palestinian President Mahmoud Abbas faces opposition from the radical Islamist Hamas, which controls the Gaza Strip, and also many in his own Fatah party and among the Palestinian public.

On both sides there are those who believe the national interest is better served without an agreement and that time plays in their favour.

The regional upheaval is also detrimental to an agreement, with uncertainty about the political future of neighbouring states meaning the parties are building on unstable terrain.

Once the negotiators get into the issues, they face significant gaps on complex subjects including security, borders, refugees and Jerusalem. The parties will have initial work to do just agreeing how to conduct the talks: to what extent deliberations will be public or private; whether they will prioritise certain issues or address all together; and whether they are aiming for an outline agreement or something more.

Then, making the concessions necessary to agree on core issues will be extremely testing. The effort it took Kerry just to establish talks shows how tough the sides will play. The enormous stakes pile pressure on negotiators to avoid concessions that will have permanent and far-reaching implications.  It does not help that from the outset, both leaders suspect the other of insincerity.

Reasons to be positive

Whilst it is easy to rattle off reasons why things won’t work out, it is important not to overstate these, nor to lose sight of factors which could play in favour of success.

The status quo and the alternatives to negotiations are problematic for both sides. Israeli leaders know they are paying an increasing diplomatic cost, and there is a broad recognition that the creation of a Palestinian state is necessary for securing Israel’s future as a Jewish majority state.

A recent change in Netanyahu’s own rhetoric reflects this. It should not go unnoticed that his statement welcoming the Kerry agreement stressed the strategic importance of preventing a bi-national state. It is one thing to accept the idea of a Palestinian state to address the demands of the Palestinians, as Netanyahu did in his 2009 Bar Ilan speech, it is quite another to say it is an Israeli national interest.

Meanwhile on the Palestinian side the economy is in deep trouble. The recognition of Palestine as a non-member state at the UN, though popular on the Palestinian street, has done nothing in practical terms for ordinary Palestinians. The bottom-up state building programme is stalled for lack of top-down political progress.

If Abbas seeks further UN resolutions in September, he risks forfeiting essential US aid and Israeli economic cooperation, triggering another financial crisis, and this time without the presence of Salam Fayyad as prime minister. This situation does not offer much of a legacy for the aging Palestinian President.

So there are incentives for each side to move forward, and whilst the leaders face domestic constraints, neither faces an immediate challenge to their rule. Israel has just been to the polls and even though Netanyahu lost seats, he was returned as prime minister’s with no serious rival for the post.

Hardcore opponents to the two-state solution may be strengthening within Likud, but they have no serious candidate to challenge Bibi. Naftali Bennett can threaten to pull his pro-settlement Jewish Home party out of the coalition, but there are other parties, including Labour and ultra-Orthodox parties, who could replace him.

Should Netanyahu ultimately bring an agreement, he has a good chance of getting majority support in a Knesset vote or a national referendum, particularly given his credentials on the centre-right.

Similarly, Abbas, though aging and lacking the authority of his predecessor Arafat, has no outstanding rival within Fatah. Hamas rule may be entrenched within the Gaza Strip, but the Islamist group have been wrong footed by the departure of President Morsi in Egypt, and their activists in the West Bank are contained by PA security forces and Israel.

Meanwhile, the negotiators are experienced and know each other well. Israeli justice minister Tzipi Livni, backed by her lead negotiator Tal Becker, spent many hours in talks with Palestinian negotiator Saeb Erekat under the Annapolis process in 2008, exploring the core final status issues. Livni’s desire to reach an agreement, her personal rallying call for five years, is beyond question.

Alongside Livni will be Netanyahu’s envoy Yitzhak Molcho. He can rightfully claim to be one of the few Israelis to have reached agreements with the Palestinians that were actually signed and implemented, having negotiated on Netanyahu’s behalf the 1997 Hebron agreement and the 1998 Wye River Memorandum.

The negotiators will enter talks against the backdrop of relatively low levels of violence emanating from Gaza and the West Bank. Furthermore, public scepticism about the process has not stopped majorities on both sides telling pollsters they still prefer a two-state outcome over any alternative.

Furthermore, whilst instability in the region could infect the process, it has apparently incentivised America’s regional allies to get publicly behind it.

The recent declaration of six Arab states in Washington that they accept the principle of land swaps was helpful, casting the Arab Peace Initiative more as an attempt to support the Palestinians in cutting a deal, rather than impose terms. Explicit Arab regional support, given in a public statement on Wednesday, also gave Abbas political cover to accept Kerry’s proposals.

The resumption of negotiations has happened through intense US diplomacy, but progress will ultimately require the parties themselves to take the lead, on the basis that it is in their own interests. The role of third party states will be to help create the best possible conditions.

It is debateable whether the furore over the EU’s new guidelines on the occupied territories helped or hindered Kerry’s efforts to bring the Palestinians to the table. Either way, maximising chances of success will mean carefully balanced pressure on both parties going forward.

This means EU states stressing to the Palestinians, that unlike in 2009-2010, they must give US-led negotiations a proper chance, and that they will not support Palestinian resolutions at the UN or elsewhere which undermine the bilateral process.

European powers should also get fully behind Kerry’s economic initiative for the Palestinians, in which Tony Blair is playing a role, and back Israeli and Palestinian civil society initiatives which create domestic support for an agreement.

Dr. Toby Greene is director of research for BICOM and author of Blair, Labour and Palestine: Conflicting Views on Middle East Peace After 9/11

7 Responses to “Why Israeli-Palestinian talks could succeed”