The Archbishop Justin Welby is back in the news today after it emerged that he met with Errol Damelin, the chief executive of payday lender Wonga.com, to tell him he wants to put the company out of business. 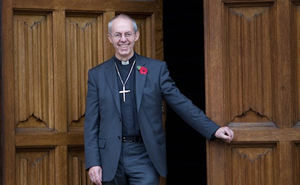 The Archbishop Justin Welby is back in the news today after it emerged that he met with Errol Damelin, the chief executive of payday lender Wonga.com, to tell him he wants to put the company out of business.

Welby told Damelin in a ‘business meeting’ that he is not in the business of influencing legislation against payday lenders; instead he plans to compete with them to drive them out of business.

In an interview with Total Politics Magazine, Welby said:

The Archbishop has also recently proposed to allow credit unions to set up shop in church halls in order to give them better access. The former oil industry executive also hopes to consult with other cooperative banks to set them up for the challenge against legal loan sharks.

Speaking with fighting talk, Welby points out that the Church has 16,000 branches in 9,000 communities – more than the banks.

Of course it is welcome news that churches will be further cooperating with credit unions. One major problem for ethical finance institutions is that they lack presence on the high street, whereas payday lenders are dotted all over the place. Putting them in churches gives them somewhere recognisable to operate and work from, and increases their presence among the local community.

The government has recently committed to a modernisation fund for credit unions of £38m, while moves to raise the legislated interest rates from 26.8 per cent to 42.6 per cent will help them to lend to more people. Now the task is giving them a more focal role in the heart of the community.

Others may like to point out that moneychangers are being allowed to re-enter the church. It may be said tongue in cheek, but doubtless this will play on some minds.

However credit unions offer lending with ‘just’ compensation. What this means is that the money made from a loan is not considered usury. One debate in biblical times and beyond was what constituted usury. Some felt it was moneylending full stop.

Others, such as Thomas Aquinas, felt that for money made from a loan to be ‘just’, it could not profit anybody, as such, but compensate for operation costs, for example.

A credit union is a not-for-profit organisation, but charges low interest in order to pay the costs of being able to lend money in the first place.

The moneychangers might be encouraged to re-enter the church; but that is because they only recoup just compensation, not profit from those less well-off. We should be ok with that.

3 Responses to “Welby’s Wonga comments are a welcome intervention”